The founding fathers would turn in their graves. The British Library is hosting an exhibition of publications in a medium once accused of undermining literacy, decency and the very establishment itself: comics.

I haven’t yet visited Comics Unmasked: Art and Anarchy in the UK, which has been curated by Paul Gravett, author of Comic Art, which I reviewed last month, but I have a shrewd idea of much of its contents because of my own involvement in the industry from the 1980s and ‘90s.

Previously I’ve been at pains to emphasise that comics are about much more than men in lycra, but we can’t ignore the lycra or the science fiction and fantasy, which is in strong evidence here. What deserves wide recognition, however, is the role of attitude in providing the energy of iconoclastic creativity that has seen so many writers and artists whose target audience was originally children become internationally hugely influential.

British comics and their creators have an anarchic spirit. In the late nineteenth century the 'Penny Dreadfuls' were sometimes considered so subversive and dangerous to the Establishment (in fomenting an industrial dispute) that at one point printing presses used for printing them were destroyed by the authorities, as documented in Martin Barker’s book Comics: Ideology, Power and the Critics.

There is a direct line from these through Fleetway’s Action comic to 2000AD, which in the late ‘70s and ‘80s saw the work of Pat Mills and John Wagner produce strips such as Nemesis the Warlock, which satirised corrupt organised religion, and Judge Dredd, which satirised just about everything including a corrupt totalitarian state (although sometimes Dredd seemed as though it was applauding the very summary dispensation of justice which it avowedly condemned).

Action was created in 1975 by Pat Mills for publishing house IPC. Soon banned for its violent content it nevertheless spawned 2000AD, the home of Judge Dredd.

2000AD could have been deliberately designed to be the kind of left-wing comic imagined by George Orwell in this fascinating article he wrote about the heavily middle and upper class boys’ comics like Gem, Magnet, Hotspur, Wizard and so on.

These class-ridden, patriotic comics were produced by the ultra-conservative family-owned Scottish DC Thompson publishers, for much of the twentieth century - up until the days of punk rock - as staple fare for boys, a deliberate antidote to the previous, anarchic Penny Dreadfuls. Orwell describes them in depth in the article and observes their propaganda value as follows:


“the stuff is read somewhere between the ages of twelve and eighteen by a very large proportion, perhaps an actual majority, of English boys, including many who will never read anything else except newspapers; and along with it they are absorbing a set of beliefs which would be regarded as hopelessly out of date in the Central Office of the Conservative Party.”

That aside, there is another ideological gradation that has Leo Baxendale’s Bash Street Kids (also published by DC Thompson in the Beano) and 2000AD at one end - produced by angry, anti-authoritarian working class writers and artists - and the middle class Frank Hampton’s neo-Imperialistic Dan Dare at the other.

Common to both is the preoccupation with slapstick humour, fantasy and science fiction as a way of boggling minds and examining present-day trends taken to extremes.

Orwell himself notes the value of Sci-Fi (which he calls Scientifiction) in this fascinating sentence:


“Whereas the Gem and Magnet derive from Dickens and Kipling, the Wizard, Champion, Modern Boy, etc., owe a great deal to H. G. Wells, who, rather than Jules Verne, is the father of ‘Scientifiction’.”


You can even position later writers, influenced by these earlier names, on this spectrum, such as Alan Moore and Grant Morrison on the left, and Neil Gaiman more in centre-ground. Grant slyly subverted Dan Dare himself, imagining him as an older man morosely looking back on the glory days of space empire in the pages of Revolver in the late ‘80s.

The ‘80s was a key time, because it was then that the kids who had been brought up on the Beano and 2000AD hit adulthood and it became cool to continue reading comics. Inspired by Moore’s Watchmen and V for Vendetta, and the American Frank Miller’s Batman: Dark Knight Returns, younger artists and writers gave birth to an explosion of creativity.

Eight years after my own story in Marvel's Captain Britain about the Northern Ireland Troubles was censored, Fleetway felt able to publish, in the overtly political Crisis comic, Garth Ennis' True Faith, (but even that graphic novel was scandalously withdrawn from sale, following complaints).

As opposition to Margaret Thatcher and the poll tax spilled over onto the streets and while Spitting Image was on tv, independent creator-owned comics sprang up all over the place, from my own satirical Doc Chaos, published by Gravett's Escape imprint, to Deadline, from Brett Ewins and Steve Dillon, which came directly from a collision between comics and the new House music club culture, the true star of which was to become Jamie Hewlett's Tank Girl.

And most of us know what happened when Hewlett met Blur's Damon Albarn: Gorillaz, the first band in history that was made up of comics characters.


I must given a special mention to Don Melia and Lionel Gracey-Whitman for publishing Aargh!, Heartbreak Hotel magazine with the supplement BLAAM! Because the mere fact that this anti-homophobic publication could be a comic was testimony to how far the medium had come since the days of Wizard and Hotspur weekly comics in which homosexuality was a heavily suppressed element. Here is Orwell describing a  cover image: “a nearly naked man of terrific muscular development has just seized a lion by the tail and flung it thirty yards over the wall of an arena”.

There was a huge amount of talent around in the ‘80s, much of which will be on evidence in the British Library show, but I find it fascinating that I, along with the far more successful Bryan Talbot, Grant Morrison, Alan Moore and Neil Gaiman, (particularly the first two) and probably Pat Mills (although I never met him) were also at the time heavily into chaos magick. We’d discuss this when we met occasionally at the bar that used to be at the foot of Centrepoint, near Titan Books’ offices where I worked, and Forbidden Planet bookshop, and at comics conventions.

Alan only went public on this more recently, but Grant overtly used his research in long-running strips such as the intensely surreal Doom Patrol and subsequently The Invisibles, both for DC.

It is not necessary to believe in any of the gods and forces invoked by magical ritual in chaos magick to utilise its effects. The point for all of us was that Nothing is Forbidden, Everything is Permitted, to use Aleister Crowley’s mantra. "Do what thou wilt shall be the whole of the law" - a phrase deliberately echoed by Mills in the story at the top of this post.

Chaos magick provided an almost limitless kit of tools to access the far reaches of the imagination. I learned my tricks from a group that met every week in Greenwich, above Bulldog’s café, from the legendary Charlie Brewster, aka Choronzon 666.

I used this massive wellspring of creativity when writing The Z-Men for Brendan McCarthy. Brendan was a maverick comics artist who started work in 2000AD, later becoming like many comics artists a film storyboarder, who was renowned for his psychedelic, mystical artwork.

All of us were also heavily influenced by Dada and Surrealism – this was the premier topic of my undergraduate degree.  It is very obvious in Grant’s Doom Patrol - just read my favourite story The Painting That Ate Paris; and how else could you come up with a superhero who is an entire street (named - of course - Danny)?

Arguably, the most successful comics writers working for American publishers in the ‘80s and ‘90s were Neil, Alan and Grant – Brits all. Frank Miller, also a giant, is American of course, and, while anarchic, is sympathetic to the other end of anarchism – right wing libertarian, which approves the right to bear arms and use them against Commie radicals.

I attribute all of their success not just to their supreme storytelling abilities but to their political views and their involvement in anything occult, arcane and extreme, because in these genres of comics, what readers demand is out-there imagination – and it takes some serious head-space distorting tricks to cultivate a mind that can repeatedly and frequently, on demand, to a punishing production schedule, come up with the mind-boggling concepts, characters and storylines required.

These lessons were not lost on the more recent wave of massively successful British writers, such as Warren Ellis and Brian Hitch, the creators of The Authority, (just read Warren Ellis' Transmetropolitan for a taste of his brand of anarchy).

And I believe there are lessons here for all writers and artists who aim at children and teens, that most demanding of all audiences, to help them feed and stoke the furnaces of creativity and imagination.

I could even attempt to sum them up in the following seven guidelines. Bear in mind that these are methods I am suggesting, and in no way am I advocating tackling a particular kind of subject matter. These are ways of researching, preparing to write and draw, and of writing and drawing itself:

Cycling in Bruges - A photo essay

Bruges, the ancient mediaeval town near Flanders fields in Belgium, is a city best cycled or walked around.

The authorities have made it easy by providing plenty of signage, bicycle lanes, and even free public bicycle pumps (below).

It's easy to hire bikes and even to cycle to the city along cycle tracks constructed alongside the railway lines, or bring a bike to the city by train. Of course it helps that Belgium is a flat country.

My wife Helen and I visited it earlier this month for the first time. I realise that with two million visitors the city gets each year, and with a 700 year old street plan, the authorities don't have much choice but to encourage cycling and walking. They do it by prioritising these modes in zones and at certain times of day.

Everybody who lives here, almost, rides a bike. There is a culture of it. You can see from the aerial photo below taken from the top of the bell tower (366 steps high - I counted them) - that there are more bikes than vehicles on the streets.

And people ride all kinds of bicycles.

I saw a man carrying two children on his bike, one on the front and another on the rear.

You can hire bikes easily and cheaply in many hire shops dotted around. We hired bikes and cycled on the lanes around the canal that encircles the city and goes past the old windmills. There is a bridge which rises and lowers to permit either canal traffic or cyclists and pedestrians. 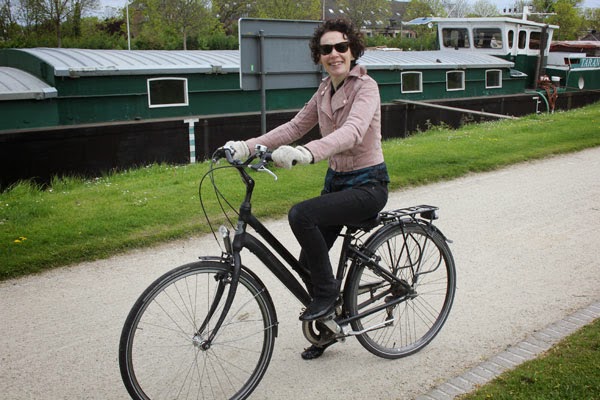 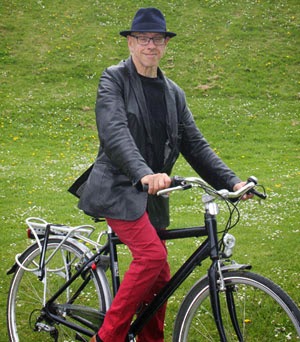 I love going to cities and cycling round them.

There are so many bikes many people don't bother to lock them when they are parked, even though the city encourages you to do so with signs like the one above.

No wonder other cities in Belgium emulate Bruges. It is a city to which others come to learn about prioritising cycling and walking in their own urban areas.
Posted by DavidKThorpe at 4:27 AM 1 comment: