The Hybrids tv series is now available for agents / producers to pick up.

The pilot script and tv series bible for Hybrids are now incredible thanks to enthusiastic and discerning feedback from Adam Stern, Director of Development at the Gotham Group, one of the top ten Hollywood production and management companies, who called it 'unique' and 'original'. He feels it's best suited for the millennial sf market, cable, and the theme is a 'hot topic'.

This revolutionary SF thriller set five minutes into the future dramatises for the millennial viewer the popular anxiety that we are being taken over by technology.
Johnny – half computer – and Kestrella – her hand is her smartphone – are hybrids. Together they battle a conspiracy that will lead them to the top of a country in chaos.
Hybrids is X-Men meets Mr Robot.
A pandemic is terrorising the country by merging victims with their most frequently-used technology. It mutates their cells so the device regrows beneath their skin. They become 'hybrids' – feared, crippled, sometimes enhanced, sometimes dead.
Are you wedded to your device?
Hybrids is now available for agents and producers to pick up. Contact: info@cyberium.co.uk
Posted by DavidKThorpe at 1:57 AM 1 comment:

Literature that touches on the topic of climate change is reaching maturity. This is evidenced by the latest collection of work just launched by the Weatherfronts project, called Realistic Utopias, in which I have an 8,000 word story, For The Greater Good.

Whether you call is climate fiction, cli-fi, stories for change or have your own pet name, it really doesn't matter. It is now such a broad church that this collection includes poetry, a very funny children's story (with illustrations), speculative fiction, human interest and domestic drama.

There was a previous collection last year:
https://cdn.freewordcentre.com/legacy/files/Weatherfronts_-_Climate_change_and_the_stories_we_tell_-_Final1_copy.pdf

The Weatherfronts project, run by TippingPoint and the Free Word Centre (where the launch happened) in London, is about using the arts to broaden the conversation about climate change, away from the scientific, polemical or political. Five stories were commissioned for this collection.

It grew out of an event that brought together fifty scientists and thinkers and fifty writers in a series of workshops. (Listen to it here.)

"One thing we have seen very clearly is that over the 12 years of TippingPoint’s life, writers' responses to the subject have grown far more sophisticated and increased in their range and scope," observed the director of the Free Word Centre, Peter Gingold, as he introduced the writers to this sold out event.


Each of the authors then read some of their work:


Then I read from my story For the Greater Good, set in 2084, in which I imagine the possible side-effects of Britain achieving a goal of feeding its population and satisfying all of its energy from renewables.

But as I'm taking the photos there isn't one of me! Anyway, a number of people said afterwards how affecting the story is. Which was satisfying, so thank you. 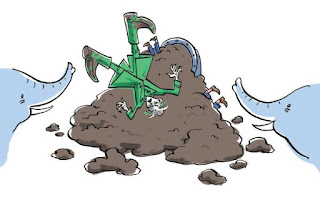 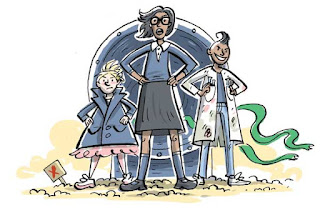 There was the inevitable panel discussion, with Durham University's Harriet Bulkley introducing Jane Riddiford, the visionary founder of the amazing Global Generation, a club for teenagers and kids in King's Cross, central London. She explained how she got the children interested in nature.

This led to the following amazing film about their work:


She guides them through periods of silent contemplation and then asks them to write about nature. Three of them came to read their work:

Then the audience had to do some work – write their own feelings about what nature meant for them, which was a cathartic experience:

The stories in this collection are all domestic. They show lives, families, affected by the changing climate and our reactions to it. They help us think about what this means and come to terms with the enormity of it. They let us develop and consider our own emotional responses.

[David Thorpe is the writer of Marvel's Captain Britain, the sci-fi YA novels Hybrids, Doc Chaos: The Chernobyl Effect and the climate change fantasy Stormteller.]
Posted by DavidKThorpe at 3:16 AM No comments:

I'm now offering this new online writing course that is based on successful classes run in the real world.

Who is it for?


This course is for anyone interested in telling stories. The aim is to provide a safe, constructive, encouraging environment in which you can get the best from your story, whatever it is.


How does it work?


It consists of modules with exercises. Students proceed at their own pace although the recommendation is to complete one module per week. If this is done, it should take about six months. Once the exercises are returned you receive feedback and the next module.

We spend a lot of time at the start on character and structure development because this helps to focus on what is really important in the story and the possibilities for how it will unfold.

The principles of the course are applicable to all kinds of storytelling, since they cover plot, character, suspense, dialogue, structure, imagery, pacing, and so on. These universal rules and guidelines work whether you are doing oral storytelling, writing screenplays, novels, graphic novels, short stories or stage and radio plays.

The course is delivered by email and Skype.


The cost of the course is £260, which is £10 per module. Don't forget, this includes individual feedback on your exercises.

The fee is payable up front. If at any point you decide not to proceed, you will receive a refund for the modules not taken.

Alternately you can set up a direct debit of £44/month.


Send an email enquiry with some information about your writing interests.
You will hear back very shortly!


David is a successful writer of fiction for adults, young adults and older children, who believes strongly that with imagination we can change the world.  He's the author of Hybrids, "a stunningly clever novel" – The Times – which won the UK HarperCollins-Saga Magazine 2006 Childrens Novelist competition.

He co-founded the London Screenwriters' Workshop and has written many short stories, TV scripts, comics and graphic novels, including for Marvel, HarperCollins, Titan Books and Macdonald-Futura.

He has also worked as a commissioning editor for various book publishers, plus as journalist and news editor, is the author of over ten non-fiction books and is a director of Cambria Publishing Co-operative. [David Thorpe is the writer of Marvel's Captain Britain, the sci-fi YA novels Hybrids, Doc Chaos: The Chernobyl Effect and the cli-fi fantasy Stormteller.]
Posted by DavidKThorpe at 5:06 AM No comments: