The phenomenon of Adventure Time and what it means Have you watched Adventure Time? Maybe you have seen the comic or the graphic novel or some of the merchandise. It's a phenomenon, not least because of the age range it seems to appeal to. It is a show on the Cartoon Network, which the network claims tops its ratings and is watched by 2 million 2–11 year old boys – but I know many older kids, including students, who watch it avidly too.

When I first saw it I must admit I was surprised that something as violent, surreal and bizarre – and sometimes with such horrific and sexual content – was being aired for young children. It has a PG rating but that does nothing to keep it from young children's impressionable brains.

Here's a list of extreme stuff you can find in it. It includes: "Lots of references to sex, ejaculation, viagra, sex-positions, sexual remarks and humor." And here's a spoof web page parodying the reaction of the Christian right.

Disney it is not.

I think it's brilliant (but then I have a degree in Dada and Surrealism), and its freshness is perhaps partly because it's not written in the conventional sense (by a writer or writer team) but produced by artists using storyboards that are then developed by a team, even going so far as deliberately to employ surrealist techniques such as the Exquisite Corpse game in order to come up with ideas. It's also hand-drawn, each 11 minute episode taking 8–9 months to make.

Now: "Who knows what evil lurks in the hearts of men?" This was the line that introduced the American radio show The Shadow in the 1930s (it later became a film, comic book series, etc etc). One answer is (besides the eponymous detective) – that children do. Children are far more preoccupied with questions about what adults call the dark side of human nature than many adults give them credit for. The best children's writers know this.

Adventure Time is therefore in the same ballpark as Where the Wild Things Are... 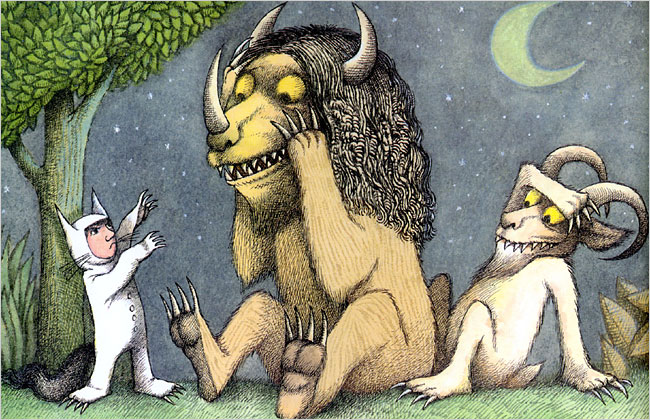 ... and the darkest of nursery rhymes and fairy stories....

... the kind that were explored by Angela Carter in her novels about growing up such as the Magic Toyshop and the Company of Wolves...

...stories where grandmothers turning to carnivorous beasts, the bedroom is populated by monsters, and the house next door contains versions of your own parents but with buttons for eyes (thanks, Neil)... 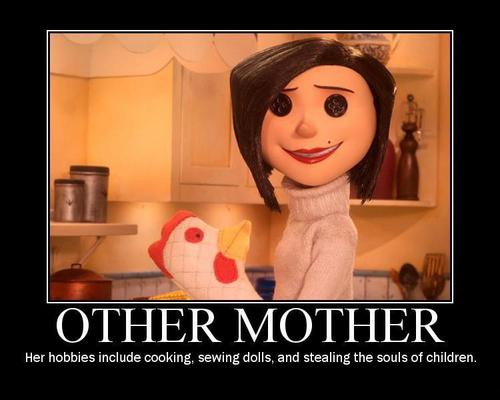 But it's also in the same ballpark as beautiful wonder-filled Hayao Miyazaki films such as My Neighbour Totoro. There is a genuine sense of beauty, spirituality and awe in many of Adventure Time's episodes or scenes, that is also shared by children who are viewing the world for the first time. It's as if the creators have been able to access their own infantile selves to identify with the way that children see the world.

My reference to The Shadow was chosen for another reason: the parts of the personality satisfied in its fans by Adventure Time and these other stories can be seen as parts of the 'shadow self', as described by the poet Robert Bly in his A Little Book on the Human Shadow.

The Jungian theory of the human shadow, itself part-derived from myths and old stories, is that babies and young children have what Bly calls a 360° personality. But much of this compass of human potential is socialised out of their behaviour during their upbringing. By the time they are around 20 years old just a slice remains. This is the socialised personality that becomes fixed as an adult.

The remaining portion is buried – the shadow – but it emerges in odd ways: our obsessions, the imaginary traits we project onto situations and other people, particularly our partners, the things we are frightened of, particularly in ourselves.

Bly says that after the age of 40 or so – the age of the midlife crisis – adults often start to unpack their shadow. Their reaction to this process determines the rest of the course of their lives.

The shadow is not bad, nor evil. Those are labels that adults put onto things. The shadow contains just what was suppressed, punished or ignored during the socialisation or upbringing process, and depends on the values held by the parents and the culture they belong too.

And this, I think, is why Adventure Time appeals to young adults as well as children. Young adults are struggling with those aspects of themselves which adults want to repress. In young adults there is a sense of nostalgia for their childhood self, that remains as a fading echo before the responsibilities of adulthood unkindly snuff it out altogether and they forget forever what being a child is like. They know this is going to happen, they regret it and they try to cling on to its last vestiges as long as possible.

The shadow is important, vital, necessary, and it is dangerous to repress it or ignore it. The makers of Adventure Time, and the Cartoon Network that commissions it, cannot be unaware of this. It is a liminal gate to the subconscious, the place where creativity thrives.

If I seem to be making rather grand claims for what is after all a children's cartoon I make no apologies. We all, as writers, are gatekeepers to this realm, aren't we? And each of us, in our own unique way, delves beyond the gate to do our work.
Posted by DavidKThorpe at 4:55 AM No comments: