The great Doris Lessing died last month. Amongst the many eulogies and obituaries I've seen no reference to the book I commissioned from her, written for older children: Playing the Game. So, in memory of her, I'd like to share the story of how it came to be, and how I met her.

She was a beautiful, exceptional person. The few hours I spent with her are extremely special in my memory. She invited me into her home, we shared meals, we looked at artwork, and all the time her viewpoints were surprising and incisive. Above all, she displayed a constantly fearless, enquiring and self-critical mind.

Playing the Game is a graphic novel. For her the ideal audience was young adolescents just beginning to step out into the world. It's an allegory, a call to adventure. 'The Game' in question is a metaphor for life.

Did she think she was "writing down" by writing a comic book or for children? Quite the opposite: "Playing the Game is one of my best ideas" she said.

The book formed part of a series of literary graphic novels I put together, the rest of which were never published. This was the first to be commissioned. The fact that Doris was so enthusiastic about writing a graphic novel meant that many other outstanding literary authors agreed to be part of the series.

She urged many of her friends, including Salman Rushdie, Martin Amis, Jenny Diski (whom she described as her ‘protegé’) and Angela Carter, to get on board, so open was she to the concept that I had pitched to her, initially via my friend Nick Webb.

This all took place between 1991 and 1995. I had been taken on by the publisher Macdonald-Futura to put together this list, which I now consider forms a lineup of the most beautiful works of literature never published.

The concept I came up with was to match formidable literary talents with the cream of international comics artists for a line of original graphic novels. Besides Doris' friends other authors who did respond positively to my invitation included Peter Greenaway, Kazuo Ishiguro, Lisa Alther and Brian Aldiss. The books would be awesome.

I have a signed, handwritten postcard from JG Ballard. It reads: “Thank you for the invitation, but graphic novels are not for me.”

I have a similar letter from Martin Amis. But he adds: “Should [writing a graphic novel] ever seem like a good idea, I’ll keep you in mind”.

Salman Rushdie’s agent also declined the invitation, as did Douglas Adam’s assistant, giving the excuse “he is at present heavily involved in writing his novel Mostly Harmless.”

But Doris Lessing was more than enthusiastic.

The first time I went round to her house in West Hampstead was with a pile of different graphic novels so that she could choose an artist. We spent a happy hour going through them. I was gobsmacked by her first choice: the Heavy Metal artist of 2000 A.D.'s ABC Warriors and Slaine, Simon Bisley. I knew Simon - he was an iron-pumping bike-riding working-class lad who had a big fan base in Hell's Angels.

His artwork was bursting with macho energy, imaginative and attention grabbing. It just jumped out of the frame. That she picked him was a measure of her understanding of the power and appeal of the genre. He was a hot and upcoming artist.

When I put the proposal to him he rejected it outright. He'd never heard of Doris Lessing and the fact that she was a Nobel prizewinner cut no ice whatsoever.

Her next choices were artists with a similar virtuoso dramatic style: Duncan Fegredo and Daniel Vallely. They too had never heard of her, didn't like the script and rejected the offer.

I was beginning to see the problem: these working class artists were mostly anarchic types whereas Doris Lessing's appeal was to quite a different audience. It says a lot about her wide-ranging tastes that she was enthusiastic about them - but it was unfortunate that the feeling was not reciprocated.

From these artists' point of view there was also a problem with the script, for she initially had not written a conventional comics script, which is broken down into pages and panels, but something looser, leaving room, she said, to allow the artist freedom to interpret. This freedom, they felt, demonstrated a lack of understanding of the medium. I don't believe it did for a minute. She understood the medium very well. But we refined the script as follows:


Page 4 of her typed script: 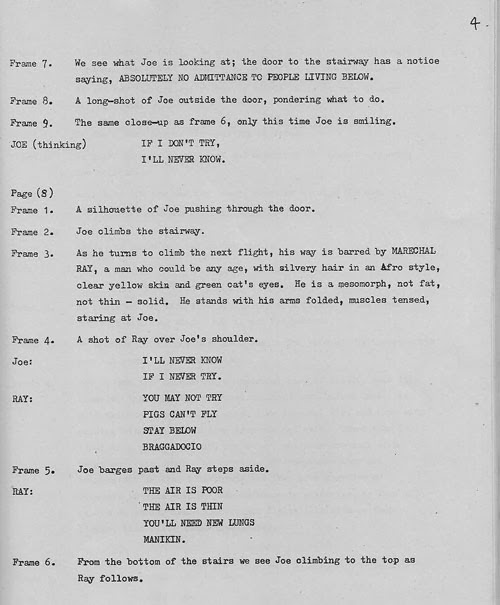 What she had written was essentially a libretto for an aria for an opera and she talked passionately about wanting her friend Philip Glass to write the music for it.

She invited me round for dinner. As her son, Peter, for whom she cared most of her life, hovered in the background, a constant presence, we talked about her disillusionment with Communism and what it was really like in Brixton during the riots. Under questioning, I conveyed why my anarchist friends, including those who were 'slumming it' from higher up the social strata (just as in her novel The Good Terrorist), thought that the portrayal of the terrorist was unrealistic, and she listened without a trace of defensiveness. Always her voracious non-judgemental mind sought out new information.

Both the series and this book had a chequered history in eventually being published, which is outlined below. In the end HarperCollins, who had just bought up the rights to all of her work, said they were keen on publishing Playing the Game.

I ultimately succeeded in finding an artist, Charlie Adlard, who had cut his teeth on a few minor Marvel Comics titles, to agree to to draw it. His style was much milder than the artists Lessing originally chose, which was a disappointment to us both. By this time I had moved from London with my family to mid-Wales. Charlie lived in Shrewsbury. We would meet in Shrewsbury pubs and he would come down the Cambrian Line to Wales, to discuss the progression of the artwork.

HarperCollins appointed a desk editor for the title. Sadly she had absolutely no experience of comics or graphic novels. The book came out in 1995. I must confess I was never happy with its final form, which I don't think did the story justice. It did not garner rave reviews; but what do critics know?

A page of inked artwork: 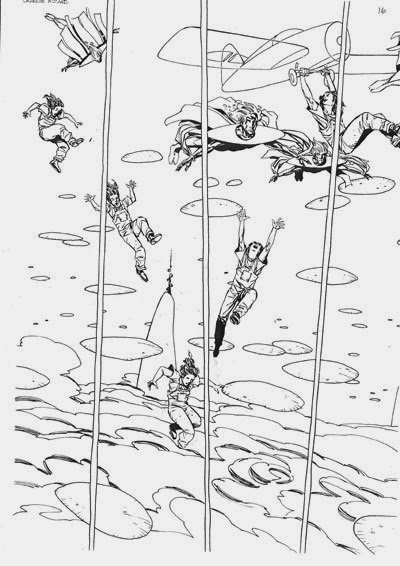 The same page as it appeared in the book having been coloured: 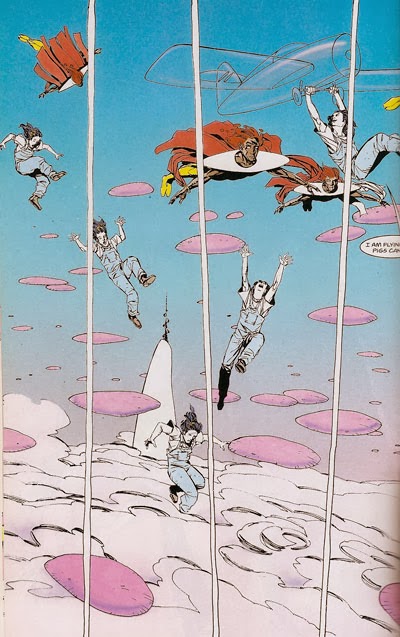 Two pages that did not appear in the finished book in the same form: 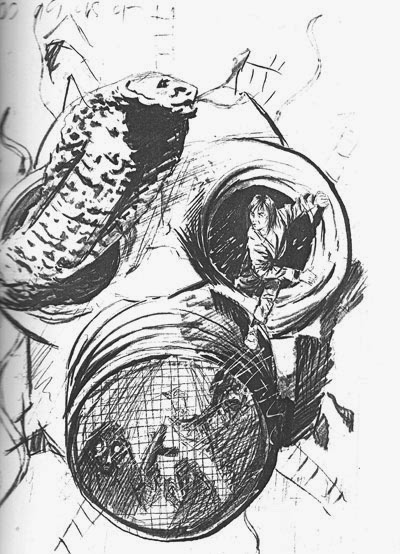 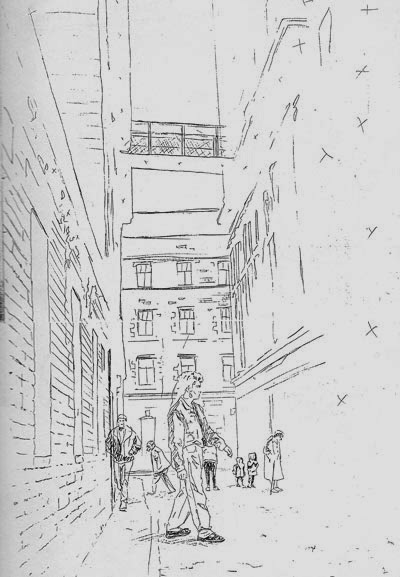 More about the series

In 1991 I was a freelance commissioning editor and writer. I had already been working for a decade as a comics writer and desk editor of UK editions of such titles as Watchmen by Alan Moore, Frank Miller’s Dark Knight Returns, Dave McKean and Neil Gaiman’s Violent Cases, plus European bandes desinées like The Magician's Wife by French comics creators François Boucq and Jerome Charyn.

Nick Webb was then MD of Macdonald-Futura. I had initially won the support of John Jarrold, now a science fiction literary agent, but then editor of the Orbit SF imprint, for my project. He got Nick excited and off we went.

The full list included, at one point, film director Peter Greenaway matched with the seminal (and very edgy) Judge Dredd artist Brian Bolland (they had long admired each others’ work, unbeknownst to one another), a work by Brian Aldiss called Her Toes Were Beautiful In the Water, to be illustrated by Italian artist Lorenzo Mattotti, and Uh-Oh City by Jonathan Carroll and Dave McKean, who had also, until I introduced them, only admired each other from afar. Dave went on to design book covers for Carroll.

You might wonder why this series did not appear other than for Doris' title.

Here is where this tale enters the realm of the gothic farce. The publishing house Macdonald, with its office near Holborn, was, like Fleetway, publishers of 2000AD, part of the vast, serpentine publishing empire owned by Robert Maxwell, then the neo-socialist arch-rival of über-capitalist Rupert Murdoch, whose own vast serpentine empire included HarperCollins. Maxwell was publisher of the Daily Mirror, which was head-to-head with Murdoch's The Sun.

On 5 November 1991, Maxwell famously slipped over the side of his luxury yacht, the Lady Ghislaine, off the Canary Islands, and his body was later found bobbing in the Atlantic Ocean. His empire imploded in a financial firestorm. Time Warner eventually bought Macdonald, but they didn’t want my series.

This situation wasn’t helped by a report from Macdonald's sales department, which was overwhelmingly negative and is worth quoting from, because the situation is so different today. They said “Reaction has ranged from disinterest to hostility...” the sales force has “a sour taste" following the “failure of Fleetway’s graphic novels”.

Fleetway's series consisted of collections of strips like Judge Dredd from 2000AD, which I had edited for Titan Books, and which were apparently overpriced for their teenage market - so were anecdotally the most shoplifted volumes on the market. “All major wholesalers have been apprised of the nature of the forthcoming list,” said the report, “and have not been interested”, even though a BBC documentary was promised covering the making of the series.

Undeterred, for several months I hawked the list around publishers both British and foreign. These expensive books largely required co-editions setting up with publishers abroad in order to make it financially possible to pay the authors and artists a reasonable fee, and the production and printing costs, and I worked hard at trade shows trying to secure these.

Editors were enthusiastic but could not make it work financially. Eventually HarperCollins, owned by Maxwell’s old rival Rupert Murdoch, accepted Playing the Game.

One of the most interesting potential titles for me was Angela Carter’s Gun for the Devil, a retelling on the Mexican-US border of the plot of Carl Maria von Weber's opera Der Freischütz (The Freeshooter). Angela and I lived not far from each other; she in Clapham and I in Dulwich. We met in her favourite tea house on Clapham Common, at the time when she already knew she didn’t have much longer to live. It was very poignant.

She didn't look ill, but radiant. She told me she wanted as much of her work published as possible, in order to provide royalties for her surviving husband and son. A version of Gun for the Devil was eventually published after her death in an anthology, American Ghosts and Old World Wonders. The version I have is a treatment.

Kazuo Ishiguro’s story was The Gourmet (a fabulous ghost story that was not original alas, but an adaptation of a tv drama), which Dave McKean also agreed to illustrate.

Iain Banks was keen to be part of the series but his agent demanded too high a fee; he and Belgian artist François Schuitten, who drew the visionary Citées Obscures series of graphic novels which I love, would have been a perfect match, and François was certainly up for it.

American writer Lisa Alther was also very enthusiastic when we met in a café in central London, and sent a magical story about how all large inland lakes with lake monsters, like Loch Ness, are connected by underground water-filled tunnels, based on a monster she had seen in one of the Great Lakes which bordered her home.

Other onboard contributors to the series included science fiction writers Chris Fowler (paired with John Bolton), Patrick Tilley, Alan Dean Foster (who with Colin MacNeil would produce a book in his Spellsinger series), Grant Morrison (a piece called W to be illustrated by Bill Koeb), and a three-book series by Shaun Hutson.

I would still love to see this series see the light of day. Nowadays, 20 years on, the market for graphic novels is very different. I believe it would welcome a list like this. I still have files of scripts or synopses in my drawers.

Posted by DavidKThorpe at 5:14 AM