Don't buy a Kindle or shop at Amazon! 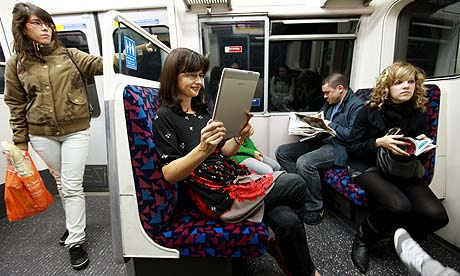 I've just been to London for a few days to promote my Sustainable Home Renovation book, and expected to see lots of e-readers in evidence on the Tube, but instead only saw ads for them.

Imagining if I had one, I realised I would probably be using it to skim read, not properly read, books with which I wanted to familiarise myself but not actually sink deeply into - which I'd still buy for real.

But if I bought an e-reader it would not be a Kindle, since Amazon is not on balance a benign influence on the publishing trade and writers' welfare.

For example, Amazon monitors your use of the Kindle. You are being watched and your reading habits reported back to their marketing department.

Furthermore, you don't own the e-books you purchase, only the right to browse them, and Amazon has the right to withdraw them from your Kindle without compensating you if its own rights over that book change. This famously and ironically happened with Orwell's 1984 - anyone who had downloaded it found suddenly that it disappeared from their machine with no compensation.

It's as if the bookshop owner came into your house one night and took back a book you'd bought from them.

In other words, you are forbidden to lend or sell the book you've just "bought". You can't lend your copy of 1984 to a friend or donate it to the school jumble sale.

Moreover, you can't back up your electronic books on to any other device – which means that if your Kindle fails, or if Amazon changes its technical standard, your entire digital library will disappear (where are your audio cassettes now? but books last forever).

Amazon is bad for writers

What's more, Amazon squeezes royalty rates for writers in its deals with publishers, so the more bookshops go out of business as a result of its price squeezing, the less royalty we get even if we were to sell more books.

It also encourages the purchase of second hand copies on which we get no royalty at all.

So I don't have Amazon links on my website, because they'll buy a copy that someone is selling for 1p plus postage. Instead I let people purchase directly from me using PayPal the copies I buy from my publisher at discount, so I make substantially more per sale - although of course I recognise most people opt to buy a copy for 1p from Amazon rather than a £5 one from me.

I recently redesigned George Monbiot's website and initially put in links to Amazon so people could buy his books there. After we had a conversation about this the anti-capitalist campaigner opted to remove the links and let people buy wherever they chose - and for example support their local bookshop - surely a good idea - even if he lost sales as a result.

Come on, let's not conspire as writers against our own interests, however seductive the temptation is! And readers - think about how writers need to eat before you buy that book from Amazon!
Posted by DavidKThorpe at 1:50 AM 1 comment: