Post-Brexit Britain is in crisis. But where is Captain Britain? 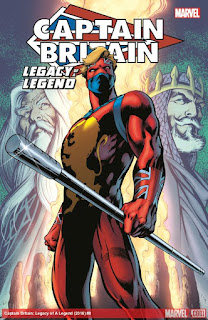 It's 40 years since Britain got its own Marvel superhero. To celebrate this anniversary Marvel has put out a new collection of stories, Captain Britain: Legacy Of A Legend. And guess who has written the introduction and some of the stories?


This pick of stories from 1975-86 is a perfect introduction to the Union Jack-clad hero, and also strings together a virtually seamless single epic that launches the Brobdingnagian cast that has formed the bedrock of all his subsequent narratives.

But right now, Captain Britain does not have his own comic book, tv series, film or anything else except the odd appearance in other comics. There was talk of a tv series or a movie, but Marvel Studios has no plans for either (I asked them – even sent a script).

Is he having a mid-life crisis?


With a name like Captain Britain the character inevitably taps the many resonances of British culture. Different creators have picked up on different aspects: Spidey clone, Arthurian hero, secret agent, trans-dimensional warrior, Carrollian surrealist, and protector against the paranormal threats...

Perhaps it's no coincidence that, right now, Britain itself is having a kind of identity crisis.

Since the 52%-48% vote to leave the European Union the country has been riven in a way not seen since the 1980s days of the miners' strike. Crimes of racism and homophobia have increased as queues at the food banks have lengthened and wage levels stagnated, and nobody knows where the country is heading. Political leadership is nowhere to be found and the country is stumbling to find its way in the world.

In the media, arguments rage over what it means to be British. Scotland, Wales and Northern Ireland are frequently at odds with the English government. Post-Brexit, here we are in our time of need.

But where is Captain Britain? Could he save us?

The character has, in some writers' hands, sometimes strayed far from his own core identity. Perhaps that is why he has never been as successful as Captain America or Spider-Man. His very name is problematic: what is he a captain of? Unlike Captain America he was never in the armed forces.

He is an orphan, a twin, from an aristocratic family fallen on hard times. He is a physicist who practices a form of magic. He is a liberal who wears the flag. He is the husband of a psychic half-fairy gypsy. He embodies, in other words, a mess of contradictions. Just like the United Kingdom.

Lately I've been thinking a lot about him. I've been trying out all kinds of storylines, including a reboot in the manner of Marvel's Ultimates series. I'm still thinking.

I have come to believe that key to his potential mass appeal is his ability to be a slate onto which others will project their hopes, wishes and fantasies about what he might be and what values he might represent. Yet he himself is his own man, picked for his heroic qualities by the wisdom of Merlyn and Roma, who back him up, and he is able to draw on the possibilities and lessons to be learned from the other versions of Britain in parallel dimensions, and on the legendary Celtic magic of Otherworld.

I believe a Captain Britain tv series should be made in Britain. In the context of Brexit and renewed soul-searching up and down the country about national identity, I think funnily enough that the country actually needs one.


Just as, in his time, Captain America has been a prism through which writers have viewed the politics of their country, a national British superhero series could also act as a focus for our national hopes and anxieties to play themselves out.


For example the tv series Sherlock and Dr Who both have a wit and dynamism that energises British themes and experiments imaginatively with quintessentially British icons. These echo throughout the world and are wildly successful.


With fantasy, it's possible to project and reflect different extensions of modern real-world trends without being didactic or partisan. That would never do.


Captain Britain is a cipher. A powerful vehicle for playing harmlessly but fruitfully with ideas about British culture now and in the past and even in the future.


As for the man behind that mask.... what would he think of all this himself?

My writing course can be taken online. Contact me if interested.
Posted by DavidKThorpe at 3:09 PM No comments:

For the Greater Good

I wrote a short story for the Weatherfronts commission. The brief was to respond to the themes and the discussions arising from a two day Weatherfronts event that took place at the Free Word Centre earlier this year.

This event brought 50 writers/artists and 50 climate change scientists together to discuss creative ways to respond to climate change.

My 8000 word story was called For the Greater Good and I've just had feedback for it from the editors:

"We really enjoyed reading it! This was a great read. The human relationships here were very believable and there were some strong emotions conjured quickly, to pull the reader in to this new, alternate world. This was a great unpicking of the moral and societal dimensions that were raised at Weatherfronts, and it broached pertinent moral questions in a plausible and non-didactic way."

The story will be published next month and there will be a launch event at the Free Word Centre on January 19. Maybe see you there?
Posted by DavidKThorpe at 11:39 AM No comments:

The 12 stages of the Hero's Journey – Are they real?

This month I thought I would publish the slides from a presentation I gave this week at my writing course.

I wanted to delve deeply into the idea of plot and structure and then test the popular technique writers are taught that quest, discovery or journey type stories all have 12 stages. I did this by analysing two recent films and book that are very different indeed: The Girl On A Train and Doctor Strange. If you haven't seen these: spoiler alert! Don't read the penultimate two slides! 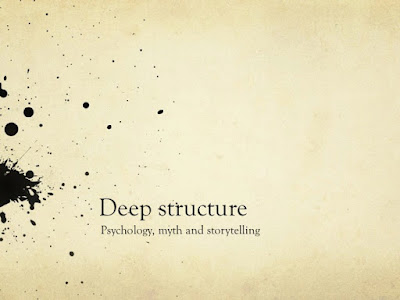 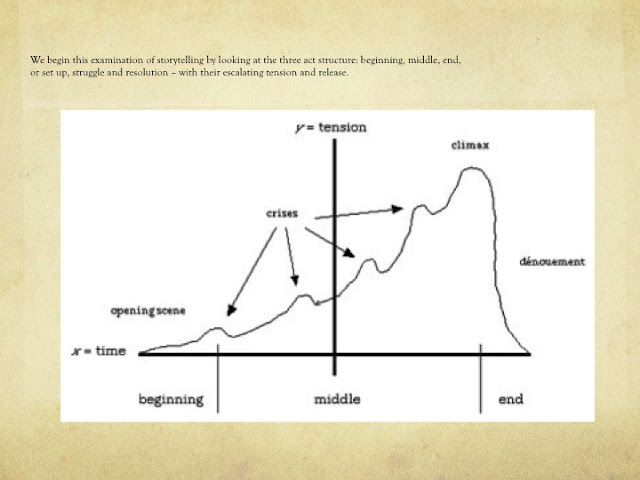 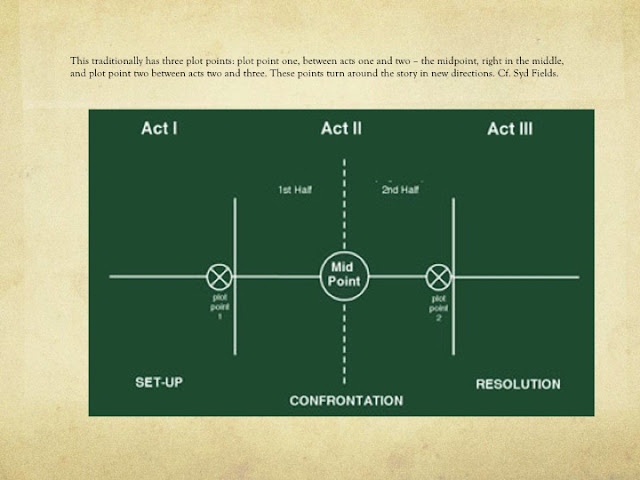 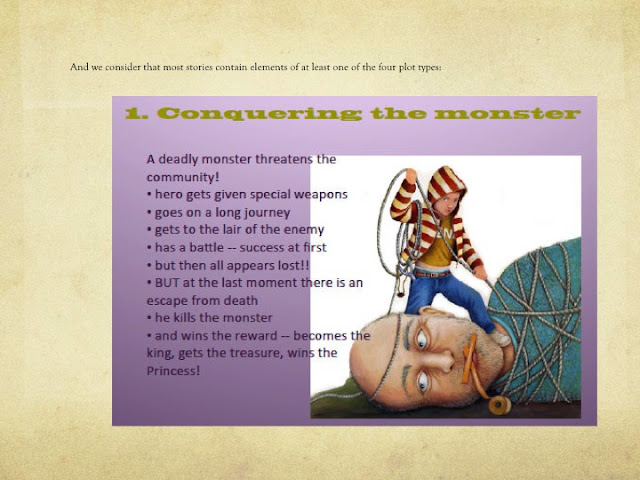 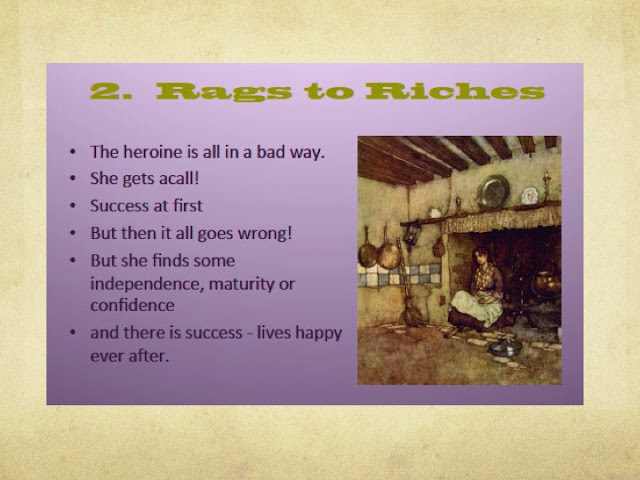 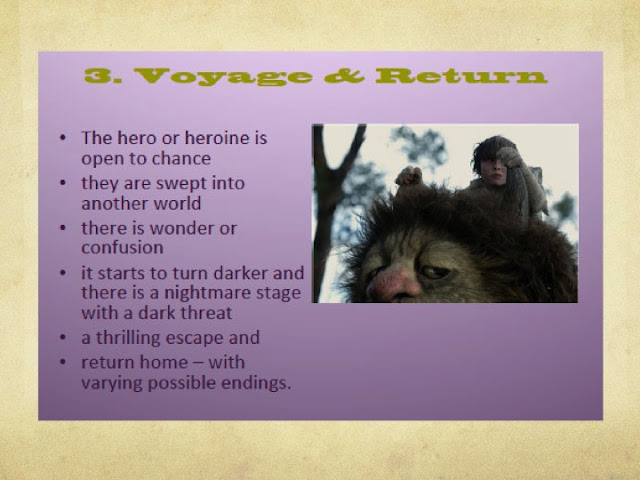 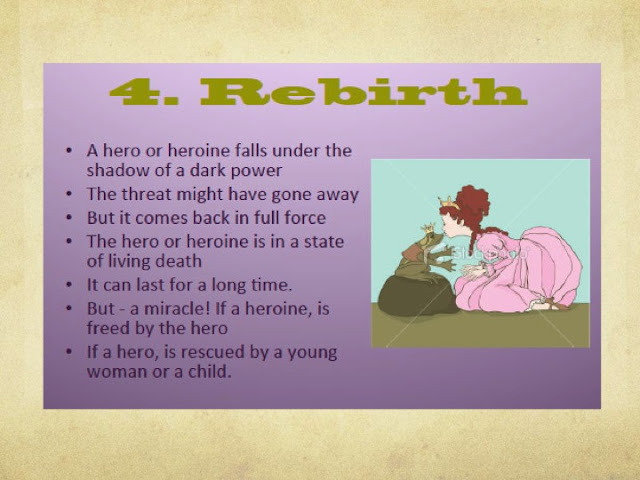 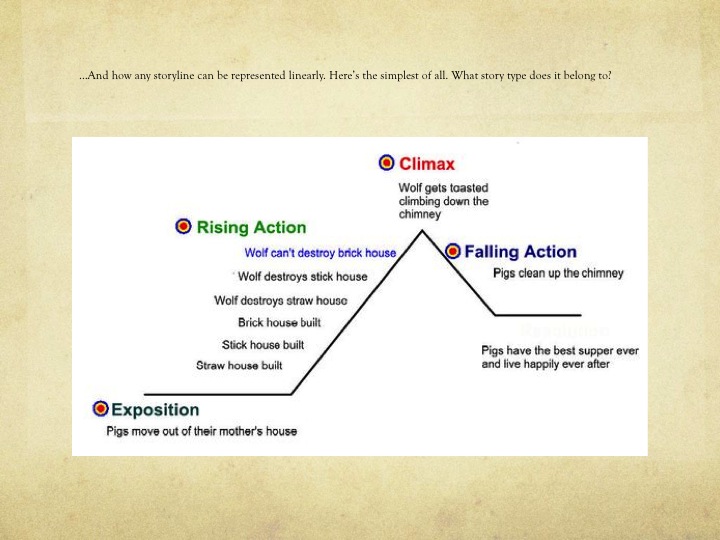 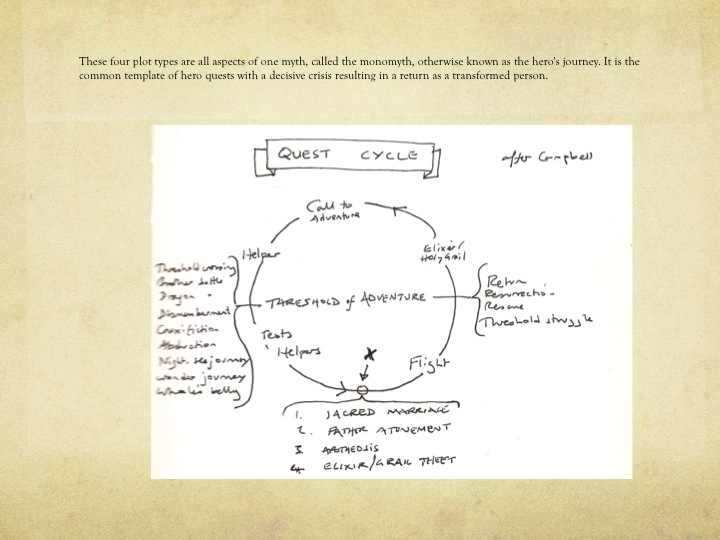 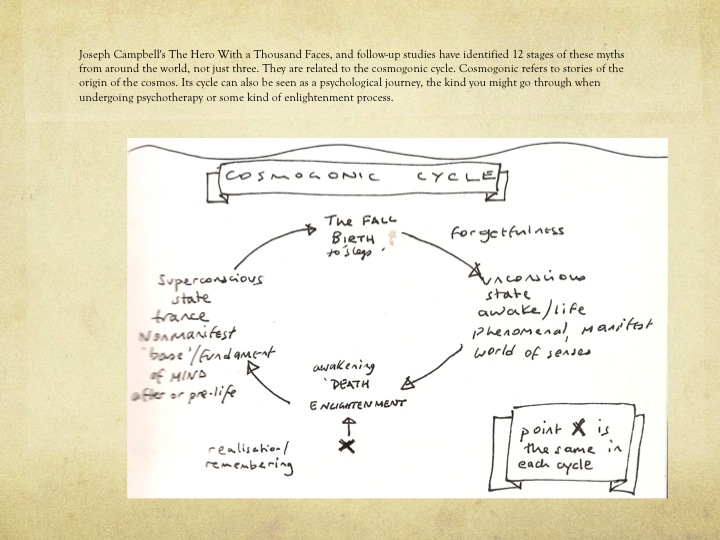 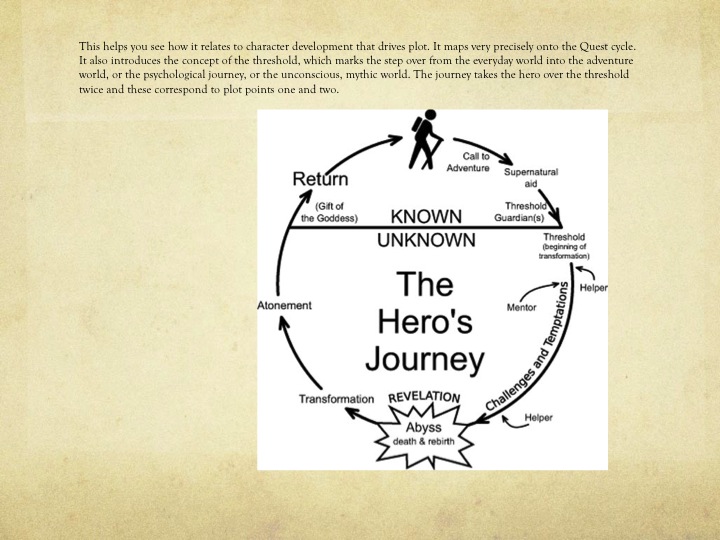 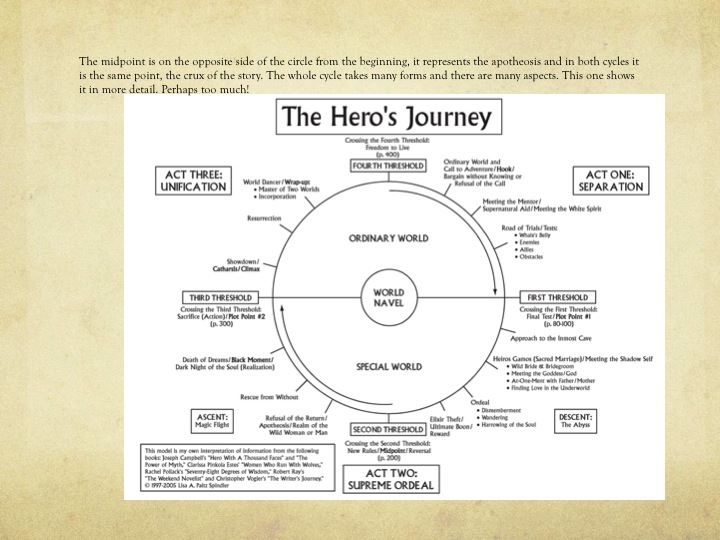 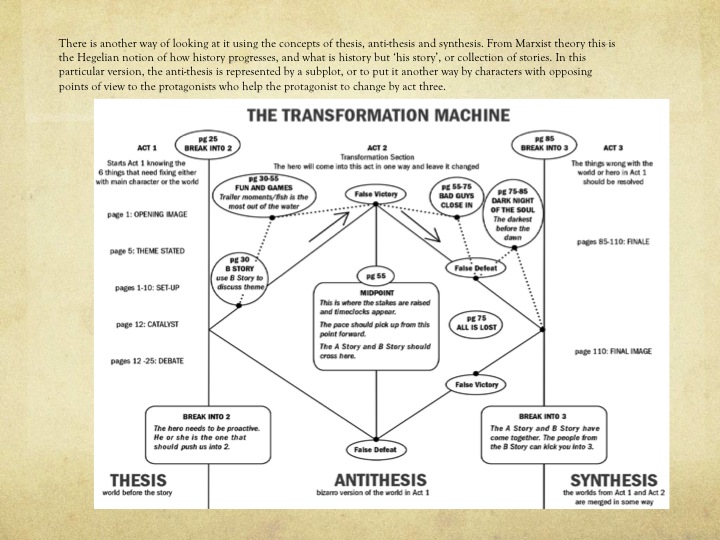 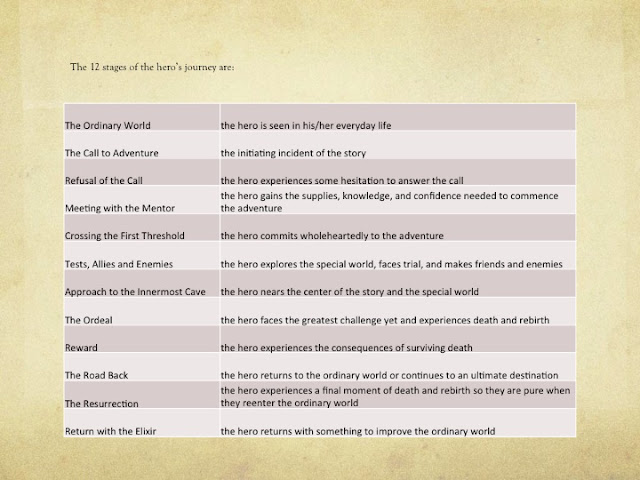 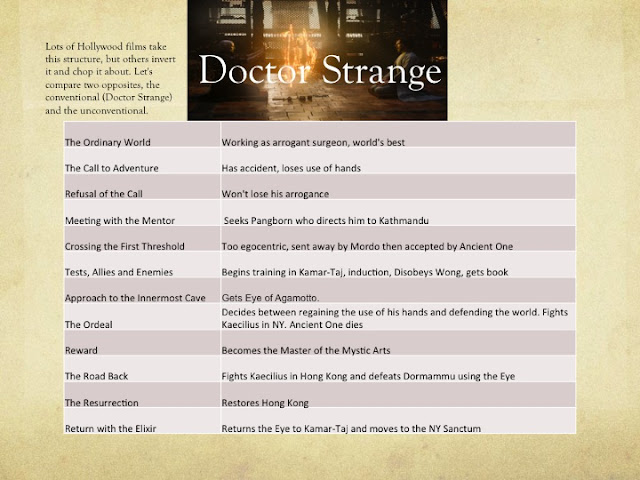 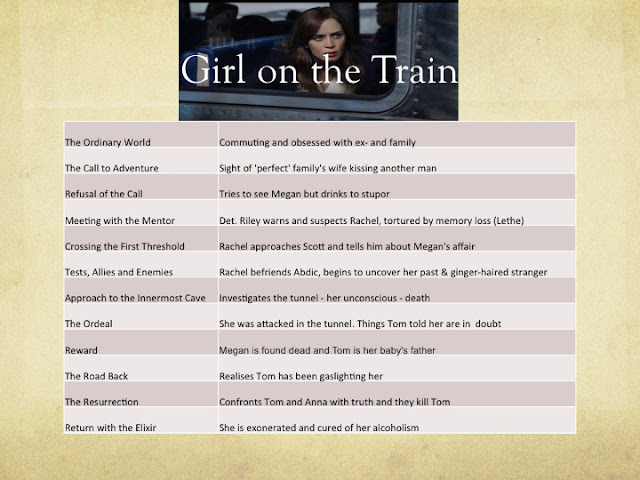 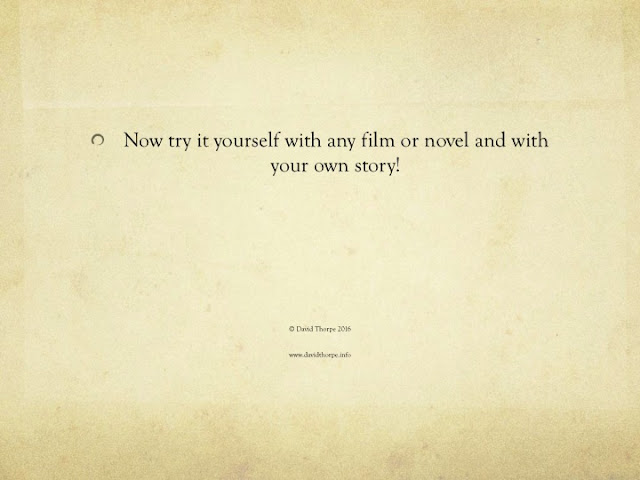 [David Thorpe is the writer of Marvel's Captain Britain, the sci-fi YA novels Hybrids, Doc Chaos: The Chernobyl Effect and the cli-fi fantasy Stormteller.]
My (12-stage, of course!) writing course can also be taken online. Contact me if interested.

Posted by DavidKThorpe at 9:24 AM No comments: