Will the real Robin Hood please stand up?

Robin Hood has a personal appeal to me, since I'm from Nottingham and my childhood was spent visiting Sherwood Forest, the Major Oak, the castle, and admiring the statue of Robin in front of its walls, while enjoying one of the tv series that happened to be aired at the time. 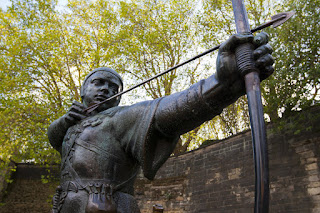 It's a simple, romantic, adventurous legend, and one enveloped in a love of nature.

The forest is emblematic of a haven. It represents freedom from oppressive authority, rather than terror (as in northern European folk stories where forests are populated by wolves, giants, elves and evil stepmothers), and it is a source of sustenance – both food and riches to be plundered from rich barons haplessly passing through.

Robin is popular amongst his peers, and will typically be protected by the peasantry to whom he donates such riches. There are no consequences to their having received stolen goods!

The legend of Robin Hood – around 800 years old – continues to excite both children and adults around the world. 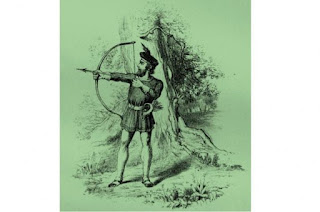 Yet another movie is coming out next year, and there have been at least three tv series. 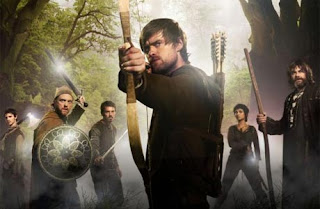 Disney brought out what's probably the worst ever version for children in 1973 where, bizarrely, Robin is anthropomorphised as a fox: 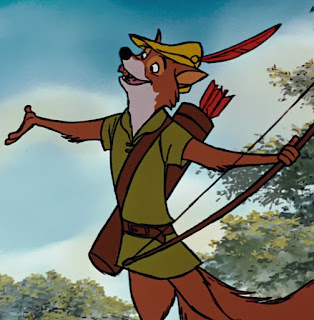 The most appealing aspect of the legend nowadays is that of social justice (perhaps it was always so): hence his name is given to a proposed tax on banking transactions, and he is a hero of the Occupy movement, while the myth has inspired a fictional character in a modern setting seeking justice in the novel Sherwood Nation.

For a while now I've been working on a reinvention of the legend which has involved some interesting research, and this month I returned to the forest, which has its own educational visitor centre, exploring the myth and catering for the half a million visitors it gets every year.

Chief exhibit is the Major Oak, where Robin and his merrie men were supposed to have hidden from the Sheriff's men: 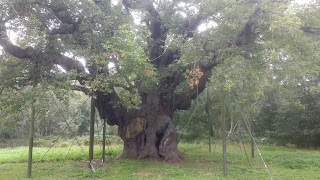 First celebrated in 1803, it is now supported and protected by a team of specialists, and is both stupendously huge and fulsomely thriving.

It's estimated to be around 800 years old, although it's impossible to be sure without cutting it down and counting the rings, which would be like killing the goose that laid the golden eggs. If it is that old, it couldn't possibly have hidden the outlaws in its copious hollow – it might have been an acorn twinkling in its parent's metaphorical eye.

When I was a kid, the public could still enter the hollow of the oak. It smelt rather unromantically of urine. Perhaps it was really Robin Hood's toilet.

The forest is chiefly birch and oak and quite beautiful. Nowadays there are no wolves, boar or deer to keep the brambles and bracken down. There's a good case to be made for rewilding at least parts of Sherwood Forest. 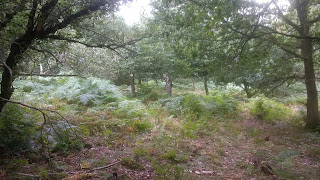 Encountering a wild boar would add to the atmosphere – and sense of adventure!

But you can still think yourself back to the old days, if you wander off the beaten track and sit alone for a while, quietly, just listening and looking.

I've also visited the caves. Nottingham is riddled with them, like a giant piece of Gorgonzola, the town being built mostly on a seam of (getting geological here) Bunter Sandstone, which is soft and easy to carve out.

In Brythonic times it was known as the Place of Caves, and, since before records began, it's said that the caves were populated. Many buildings in the old town are built into the rock, with back rooms or cellars that are caves.

Most famous of these is what is probably the oldest Inn in the world, the Trip to Jerusalem (first port of call on a Chaucerian type pilgrimage), built into the foot of the castle rock. This is the best picture I could get looking from the upper bar up the old chimney that wound its way to the top, where the old castle was: 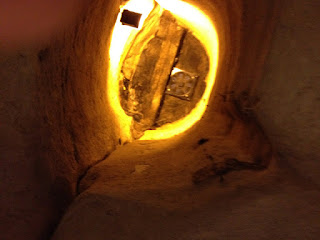 The passage is blocked off now, but I remember when it wasn't.

The caves that I explored (with permission from the council) are situated behind a cemetery close to my old school. There's evidence they are still lived in – nowadays by the  otherwise homeless. 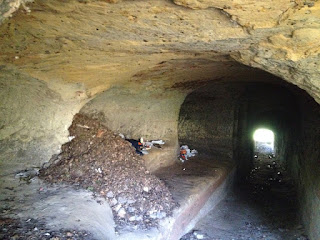 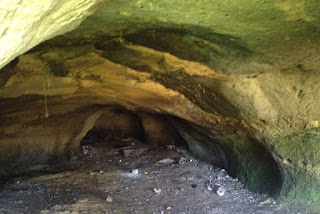 There are several succinct cave networks, and some of them still haven't been fully explored. There's a visitor centre for the caves too.

At risk that this post is beginning to sound like it's sponsored by Nottingham Council's tourism department (it isn't, but donations gratefully received), let's move on to a little bit of other history, namely, what was it like to be a child in 1190?

After that boys had to either work or be apprenticed to a trade, and non-peasant girls would begin learning etiquette and the skills to be a noble wife.

The sons of nobleman had to learn how to be vicious in combat in order to be successful knights. I mean REALLY vicious.

If a boy could not afford to be a knight (it cost a lot to buy chain mail, armour, swords and horses), then they lost their right to land.

Many of these boys had no choice but to live in the forest amongst the other outlaws, stealing and butchering to survive.

For the most part the common people were otherwise left to fend for themselves, as long as they gave their tithes to the manor and respected the church and Norman law. Otherwise they were steeped in beliefs in magic, the Green Man and fayries...

A tough life – but you knew your place. 27 generations ago.  I quite like to think one of my ancestors might have been an outlaw and lived with Robin Hood. A bit of him or her lives on in me....

David's  writing course can be found here. He is the author of Hybrids, Stormteller and Marvel's Captain Britain amongst others. His new short story imagining a future Britain – For The Greater Good – is featured in this free ebook: Weatherfronts: The Stories We Tell.  Hybrids and Stormteller can be found and bought here.

Posted by DavidKThorpe at 7:43 AM No comments: