If 80% of 'Young Adult' books are bought by adults, should we keep the label?

Did you know that 80% of Young Adult (YA) books are bought by adults? Why do you think this is? And what does this mean for the future of this label, for publishers and readers? As a writer of books for young adults, who has just completed what might be described as a young adult/crossover novel, this subject interests me intensely.

Some fascinating insights into children's book reading habits and book sales were recently revealed by market research company Nielsen Books at its second annual Children’s Book Summit at Convene, NYC, on September 15. Before moving on to a discussion of the YA label, here are some key other points:

TABLET READING AGE DOWN: The spread into households of tablets and other digital devices has meant that children start reading e-books from the age of five, rather than seven previously. And, children from as young as a year-and-a-half are using tablets and engaging with content.

PRINT BOOK SALES UP: But this does not seem to be harming the sales of printed books: board book sales have grown by 20% over the last three years. Only 10% of children's books were e-books compared to 19% of all books in the last quarter of 2014.

MANY YOUNGER READERS SEEM TO PREFER PRINT OVER DIGITAL: There was speculation over why: Kristin McLean, Nielsen Book’s Director of New Business Development, said: "Partly they like to share them. Teens also like to carry books around, show off what they’re reading. Partly because [print books are] easier to get without a credit card, they like to use the library."

THERE ARE INTERESTING VARIATIONS AROUND THE WORLD: Mostly children's book publishing takes around 34% of all book sales on average around the world, a striking exception being in Australia and New Zealand where it is almost 50%. (What that says about adult reading habits is not mentioned, although it is mentioned that print sales of adult fiction and non-fiction have dropped in the US while the juvenile market has concomitantly grown 40% in the last decade. It's the categories of religion, today's and non-fiction that have seen the greater increase in sales and surprisingly e-books are down 14% this year so far.

WOMEN ARE THE MAIN PURCHASES OF CHILDREN'S BOOKS: no surprise there.

MORE BOOKS ARE BEING BOUGHT ONLINE: With the demise of the Borders chain, sales in chains generally are down too. Sales from independent bookstores are stable but sales from school book clubs have increased.

5-8 IS THE BEST SELLING AGE GROUP: The most important age group for children's books in terms of market share was 5-8, accounting for 38% of sales to all children.

The Curious Case  of the Young Adult Label

Then the event came to the topic that interests me most. As we found out, rather surprisingly, earlier this year, a staggering 80% of all YA books that are selling are not being bought by teenagers but by adults. 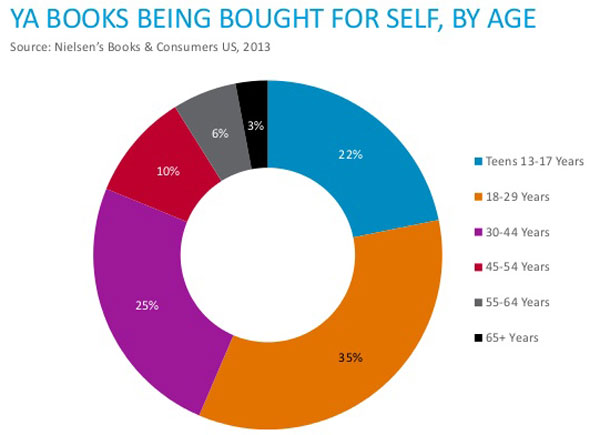 To find out why this is happening, Nielsen asked a panel of eight adult consumers of young adult novels. They "seemed to suggest that the YA label can be limiting", they reported. YA isn't a genre, it's an age designation, so it doesn't help to say what the book is about.

But one member of the panel, a mother of two teenagers, said it was a useful label when trying to identify books that were appropriate for her children.

Many of these readers come across the books in bookshops, attracted by the cover design, or by hearing of movie in TV adaptations, through the Internet via GoodReads and twitter.

They overwhelmingly prefer fiction. And, their motivation for reading is that they enjoy getting into the character's head and growing along with them. One panellist said the YA label should be changed to YAH – Young at Heart. I find this patronising. I don't think it will catch on!

But the fact that she said this is illuminating. It tells us why older people are reading books for teenagers: they are still asking the questions and trying to understand the changes that are supposed to only happen during teen years. Maybe what it says is that we never stop growing up, contrary to how we are supposed to feel as adults.

Nielsen also brought along a panel of suburban teenagers who also had something to say about the label YA, namely that they don't take much notice of it because it doesn't say what kind of a book it is. Instead they are definitely attracted by movie releases when choosing what to read, as well as the Internet and Amazon's suggested books feature and Wattpad.

So where does this leave YA? I don't think it's going to go away any time soon, since it does help books to reach a market. But if we write is no most of our readers aren't even going to be teenagers but older, this should liberate us to write about more adult subjects and help us be less reticent about using certain kind of language. In other words, we can let our imaginations go further.

Below, find some more infographics from the presentations. 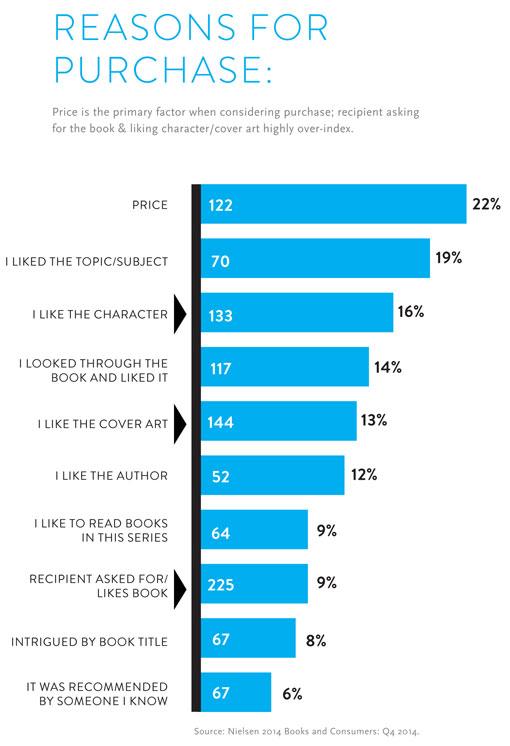 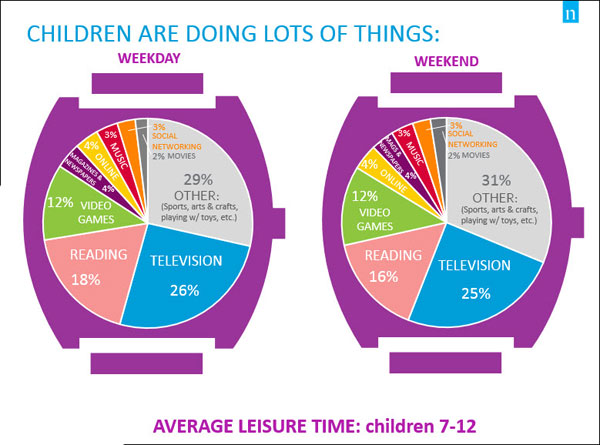 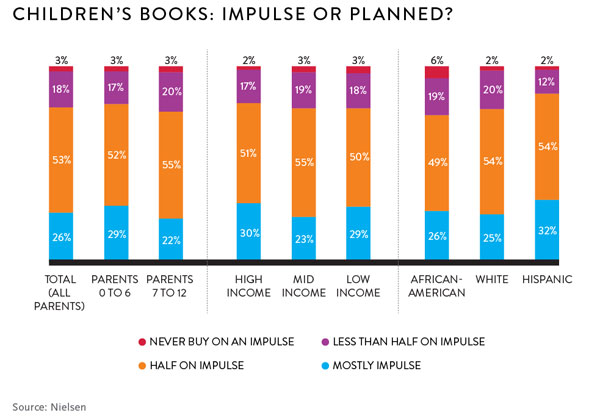 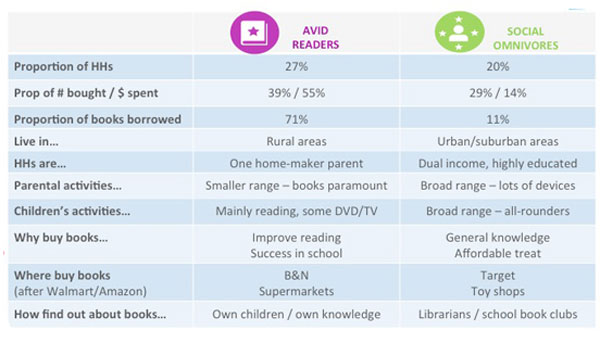 David Thorpe is the writer of the Sci-Fi YA novel Hybrids and the cli-fi YA novel Stormteller.
Posted by DavidKThorpe at 4:29 AM No comments: