On the Trail of the Mari Lwyd 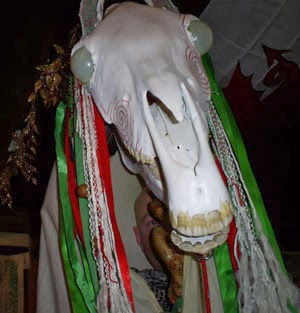 Imagine it's a dark midwinter night. You're out on a windy street in Wales. Suddenly an apparition appears before you: a white garbed ghostly figure over six feet tall.

From its ragged cowl protrudes a skull - but no human skull - it has a long snout, huge eyes and many teeth set in a long jaw that snaps together repeatedly as it comes towards you.

Now you notice a band of musicians who strike up a tune, a troupe of strangely-garbed figures.

Don't be afraid. It's only me and my associates. We're reviving an old midwinter tradition.

The tradition is called the Mari Lwyd (it means Grey Mary in Welsh). It has links with Punch and Judy, the need to bring cheer during the dark midwinter nights, and I've even discovered a connection that Susan Cooper made in her The Dark is Rising series between the Mari Lwyd and Merlin.

I encountered this tradition for the first time in the midwinter of 2011-12 when my wife Helen, a fiddle player, was asked to accompany two artists who live in Carmarthen and who are obsessed with the Mari (as it's known for short).

The artists, Phil Larcher and Viv Morgan, are obsessed to the extent that their entire apartment is decorated with pictures and objects they have made of Maris.

"The Mari Lwyd was a horses skull draped in yards of white canvas and looking like a ghostly spirit except for the adornment of coloured ribbons [we use red and green from the Welsh flag], black bottle-glass eyes [ours has flashing lights] and black cloth or leather ears. Hidden underneath the canvas, a man with a 5 foot pole operated the Mari's jaw, which was on a spring, enabling it to snap."

A host of traditional characters used to accompany the spectral mare: the Ostler or Leader, plus a Corporal, Sargeant, Punch, Judy and Merryman. There are many local variations, and records of the tradition are sporadic and rare throughout Wales. Moreover some areas have completely forgotten about the tradition, despite the recent revival in interest, whereas in others some individuals, upon seeing the Mari coming down the street, give a shout of recognition.

They remember it from their childhoods.

Essentially what used to happen was that the party would knock on a door of a house and a ritualised exchange of banter would occur, each with an occasion for a specific piece of music. 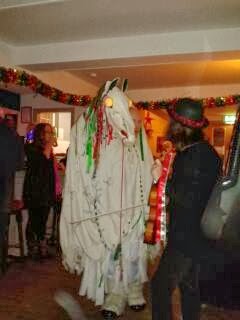 Here are the words of the Mari Lwyd Farewell song:

In our part of Wales, Carmarthenshire, as the tradition is being revived we do not visit people's houses but pubs instead. This is the second year I've been involved and the group has got larger partly because my wife has been running a Welsh tunes workshop in which we have been rehearsing the music.


Phil Larcher and Viv Morgan with their Mari Lwyd in the White Horse, Llandeilo, Carmarthenshire, in January 2012 with fiddler Helen Adam.

We made two visits last year towards the end of December. In Carmarthen we stayed in one pub, The Parrot, all evening and were given a cake baked specially for the occasion!

In Llandovery our large party (two fiddlers, guitar, five percussionists including a monk, a flautist and an accordionist - my son Nemos - plus assorted singers) were turned away from the first pub. The second permitted us to terrorise the diners - who didn't know what had hit them!

We visited two more pubs and, halfway through the evening, a twmpath, or ceilidh in the community hall which we proceeded to disrupt - much to the dancers' enjoyment.

When we went to the final pub we found someone who obviously knew we were coming who was wearing a massive papier maché head with a top hat, whom I took to be the Merryman and who danced to our music.

But what are the origins of this madness?

Given the link with Punch and Judy, one line of ancestry may lead back to the 16th-century Italian commedia dell'arte, a touring troupe of actors with stock characters. Punch derives from the Neapolitan stock character of Pulcinella, a manifestation of the Lord of Misrule and Trickster figure found in many old mythologies. His wife was originally called Joan.

The Mari Lwyd ritual has also been described as "a pre-Christian horse ceremony" associated with many similar customs throughout the world. Some aspects of it, including some of the music, suggest considerable age.

The Mari could be associated with the Welsh mythic figure Rhiannon, who first appears in the Mabinogion, the Welsh cycle of old stories, riding a shining white horse.

Our Mari is decorated with pagan symbols. The Leader, Viv, carries a broom whose staff is richly decorated, topped with a small black bird, and whose brush is made with freshly picked herbs. 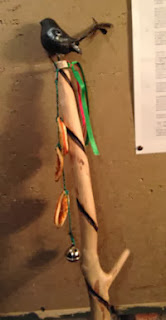 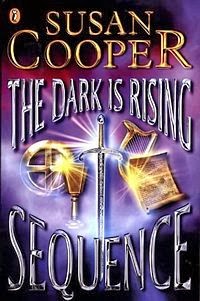 Susan Cooper's brilliant The Dark Is Rising epic cycle of five children's fantasy books includes a character called Merryman. He is one of the Old Ones, on the side of Light. The second book, The Dark Is Rising, and the final book, Silver on the Tree, are set around Aberdyfi, south Gwynedd, in the area where her parents and grandparents lived, and it is likely Susan would have known of the Mari Lwyd tradition.

One of the manifestations of Merryman in the book cycle is Merlin.

You might ask where a horse's skull might be obtained. If you look, they come to you. Viv and Phil swear that they found theirs hanging in the branches of a tree one day when they went for a walk following a storm.

The ritual is not associated with any particular day of the year, just any time around midwinter and the turning of the year, and so it can be repeated in different places. We have one further date on January 11 in Llandeilo, where we will be visiting three pubs during the course of the evening. Perhaps we'll see you.

Traditionally, the host are supposed to give us a drink in each one, but I don't think the publicans have yet cottoned on to this.

Nevertheless it's the best excuse for a pub crawl and a lot of fun on a dark midwinter night that I've come across in a long time. And the Tricksters and Lords of Misrule demand their time. There are those who would like to tame them - but they will not be tamed. Maris are wild. 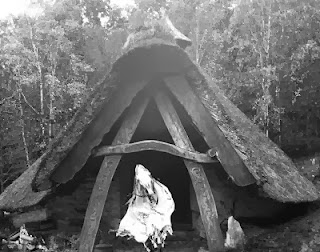 They have a life of their own. They have been spotted gathering together when the night is dark in wooded valleys where caves can be found.

If you should hear the snapping of jaws and the sound of hooves one dark night - don't venture near. The Maris don't care to be watched by the uninitiated. 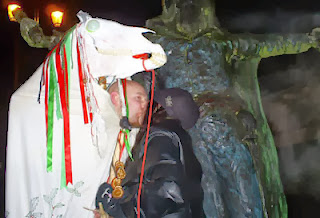 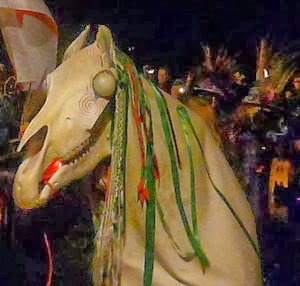 Photos: Phil Larcher.
Posted by DavidKThorpe at 4:44 AM No comments: