Is the structure of a story archetypal?

This is weird. For years I went by the standard Hollywood scriptwriting rule which says that the three act structure is god. As it was taught to me in my scriptwriting class and as I taught it to hundreds of students, in a standard drama act one finishes one quarter of the way in and act three begins one quarter before the end. There's also a midpoint where there's another not quite so pronounced change of direction or momentum. 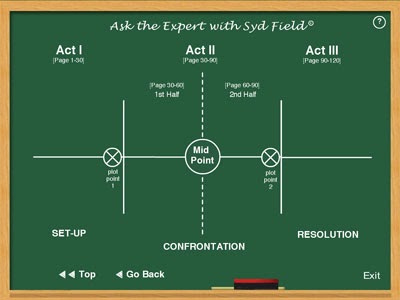 I tested it out many times with my watch while watching movies and even when writing scripts, counting the number of pages in, to confirm that at these magical points the main plotline undergoes a major shift of direction or gear. Of course you all know this.

Plenty of stories do not quite conform to this rule (usually short or very long or episodic ones) and post-modern writers mess about with it. If there are many subplots or intertwining storylines there will also be distortion, but you can often pick apart these individual storylines and apply the same rule to them.

It's not as if this is deliberate. It seemed to be an intrinsic quality of the way the human mind appreciates the telling of a story and, correspondingly, the writing of one.

Now the novel I am principally engaged on right now has an unusual storyline: it is circular, so in principle has no beginning, middle or end. It's a story (and I don't want to give too much away) that I had been wrestling with how to tell since I first thought of the idea almost half a lifetime ago.

Many times I came to it, tried to write the opening pages and got nowhere. I put it down but it kept bothering me. I knew there was a really good idea in there somewhere. But because it was circular I couldn't get a handle on it, from a dramatic point of view. There were other issues: I needed to do research and at the time wasn't fully capable of it. Some stories have very long gestation period.

Sometimes when you are struggling with a problem like this you read another novel that is quite different and it can give you a sudden insight into your own story, and for me in this particular case it was reading The Raw Shark Texts by Steven Hall which is a very curious book indeed. In case you haven't read it, it is about creatures which exist beneath the surface of a page when you are reading a book which have a life of their own and if you're not very careful they can devour you.

That's quite a powerful idea. It gave me another idea, also, I like to think, powerful. I put it into my mix.

The second new ingredient came from reading a non-fiction book, The End Of Time by Julian Barbour, which argues that time does not exist – except in our consciousnesses. It's quite possible to describe the universe mathematically without recourse to time, he argues.

But if there is no time, how can a story have beginning, middle or end? In fact, how can there be stories at all? Logically, outside of our consciousnesses, stories are impossible. They do not exist 'out there'. We invent them to entertain each other and help ourselves remember stuff.

The third and final necessary ingredient for me to get a handle on my story was to determine the point of view. Up to then I did not have one, other than that of an omniscient narrator. It all fell into place when I realised that I needed a new character from whose perspective everything else was told. Once this had dawned on me, and I'd decided upon who that character was and his relationship to the other protagonists, the story could be written.

First I wrote the synopsis, then a long treatment. I needed to have it all plotted out because it was very complicated. Two years later I found the time to write the first draft and completed it by summer 2013. I left it for nearly a year and then completed the second draft last month.

I then thought I would try an experiment, and I looked at what happened precisely one quarter, one half, and three quarters of the way through the draft. Lo and behold, there were the plot points – in exactly the places where the theory said they should be.

How did this happen? I have a hypothesis, but that's all. Even though the story is circular I had to start it somewhere. Given that my narrator is deliberately telling the story for the benefit of another character in the novel, then the story begins at the most significant entry point for him. He then recounts the story until he reaches the point at which there is a suitable ending for him. This is just his perspective on the events.

Another character might have begun to describe the events at a different temporal point. Nevertheless I chose the character of the narrator, and therefore I am ultimately responsible for choosing where the novel starts to describe the circle of events, and it made total sense to start it there once I had made that choice.

I am incapable, however, of working out whether the final emergent structure is subconsciously imprinted into the novel because it is so deeply engrained in my own mind – as a kind of self-fulfilling prophecy – or whether it would have been there anyway. I know that I needed to establish the characters and the situation before the story could really take off, and I know that the pacing and dramatic intensity needed to increase as the narrative progresses. So I surmise that I had probably adopted the structure and these principles without deliberate intention. 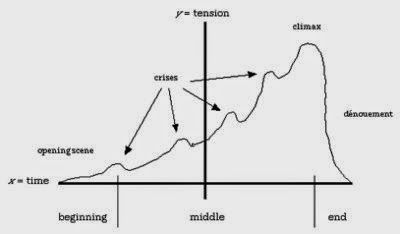 It's vaguely satisfying to know that this happens automatically but also slightly disturbing. I have felt, at times, like dividing the chapters or episodes up and randomly shuffling them to see if anything interesting emerged from the new ordering, but intuitively I suspect that might be a waste of time. An interesting experiment nonetheless. Perhaps I still ought to do it.

I think Barbour is right, and time – therefore stories – do only exist in our minds. Story structure is a necessary consequence of consciousness because we cannot appreciate what comes later without knowing what has come before – whether the story is true, historical, or fiction. We also need to be made to care for the characters before we are motivated to turn the page.

We are prisoners of time and so bound to the logic of narrative. We seek beginnings, middles and ends even where there are none.

I wonder if any of you have similar experiences your own writing processes?

Posted by DavidKThorpe at 7:49 AM No comments:

My new novel Stormteller - out in November!

I'm very pleased to announce that Cambria Books has offered to publish my new YA novel Stormteller. It will come out in November 2014 to coincide with the release of my non-fiction book from Routledge on the same theme, The One Planet Life. The cover is being produced now by the amazing illustrator Elaine Franks. Here's the blurb:
If our lives are governed by forces outside our control, where can we find hope?

When a storm surge destroys Tomos’ luxury home and his parents die, and Bryn’s eco-home is torched and his parents killed by starving marauders, these two rivals for the same girl, Eira are forced to rely upon each other for survival in the wild uplands of Wales (the same locations as appear in the TV series Hinterland).
One of them will die, but not before they discover the astonishing bond that joins them together. And none of these three teenagers are aware that they are living out an ancient rivalry between fabulous beings – such as Ceridwen, the Welsh Goddess of Inspiration - who are seeking to rewrite the endings of their own stories.

This bewitching drama set in the very near future entwines Celtic myth and climate-changed destinies to answer the fundamental question: can we escape our apparent fate?

"A fabulous piece of story telling" - Richard Collins, author of The Land As Viewed From The Sea (shortlisted for the Whitbread First Novel Award) and three other novels.

"David Thorpe has written a compelling story in which elements of ancient Welsh legends of drowned lands and villages combine with a prescient account of a near future in which global warming is causing catastrophic flooding. Set against this background three teenagers are caught up both in the throes of ancient magic and a modern tragedy." - Frances Thomas, author of many children's and adults novels.

"David Thorpe's Stormteller is an intriguing and enthralling novel about the relationship between two teenage boys, leading totally different lives yet strangely alike.  The novel is set in a coastal Wales ravaged by climate change and rising sea levels.  Underpinned by fascinating parallels with local folk tale, the story of two boys who both love the same girl at a time when fear stalks the land is sure to appeal to a wide audience." - multi-prize-winning author Malachy Doyle.

Posted by DavidKThorpe at 9:46 AM No comments: