Writing for TV: The Market for SF/Fantasy is Stronger Than Ever

This blog is usually addressed at writers of children's books but there are other markets for children's writers, such as comics, graphic novels, television and film which are worth considering.

This month I did a short survey of the state of the market for science fiction and fantasy television series for the producer optioning my own SF book, Hybrids for tv. I looked at series that were not necessarily just for children, but many of which may be watched by young people, that are on our screens this year or in development up to 2017. (Of course just because something is in development does not mean it will be produced or reach the screens, but even so writers may be paid to produce scripts or plots.)

I was astonished to find over 60 series in this SF&F category alone. The market has expanded hugely as television has become more international and companies like Netflix and Amazon enter the market, and I feel very encouraged by this.

Of these 60+, around half are adapted from books: 12 from the UK and 21 from the USA. Six are adapted from comics, continuing the trend of taking Marvel and DC characters to small screens. They include X-Men, Daredevil, Supergirl and Luke Cage.

Many of you might have seen Tatau, an eight-part paranormal series for a younger audience for BBC3 set in the Cook Islands and New Zealand, written by Richard Zajdiic, who got his tv break writing for EastEnders, then moved onto This Life and Attachments, an interesting series about an Internet start-up that was developed by the brilliant veteran scriptwriter Tony Garnett and was probably ahead of its time.

Richard gives his own advice for writers who want to break into the market:


"It's not just about talent. Luck is a huge factor too - being in the right place at the right time - so perseverance and tenacity are equally important. Remember, it's a marathon not a sprint. Hang on in there and hopefully you'll win one eventually.
"There are so many factors in getting a show made, let alone recommissioned, most of which are totally outside your control. I've had several development scripts praised by all parties involved, even one where the director (Peter Kosminsky, no less) was scouting locations and sending me pictures of where he was going to shoot my scenes but then, crushingly, the coveted green-light somehow failed to materalise. I also wrote on the prison drama Buried which won a BAFTA for best drama series and gained widespread critical acclaim. Channel 4 cancelled it. Go figure." 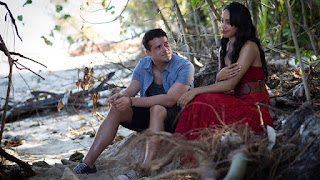 Historical fantasy is popular in the wake of Game of Thrones and the BBC’s adaptation of Susanna Clarke’s Jonathan Strange & Mr Norrell. It is being further capitalised upon big time by the BBC with three series:


ITV is not being left out with The Frankenstein Chronicles, a six-part series being made for ITV Encore following in the wake of Penny Dreadful.

Children's writer Charlie Higson (best known for the young James Bond) continues the classic horror theme with a 10 part version of Jekyll & Hyde to be set in the 1930s. Robert Jekyll is the grandson of the original doctor. It will begin screening on ITV in October.

[While we're on the subject, did you know that Anthony Horowitz was offered the chance to write that Young Bond series and turned it down? Never mind, he's since been picked to update another classic character, Sherlock Holmes and to write The House of Silk and Moriarty, and a new Bond novel Trigger Mortis, to be published later this year.]

Mary Shelley's richly resonant and prescient novel Frankenstein also inspires another series called The Frankenstein Code, that's being developed by Michael Cuesta for 20th Century Fox television and written by Rand Ravich and Howard Gordon, set to air next year. However it actually has little to do with Frankenstein apart from the fact that a corrupt sheriff is brought back to life in the body of a younger man.

The BBC has a kind of Humans for children, a gentle comedy about a family who have to share the house with the world's first fully sentient artificial person, called, with a stroke of originality, Eve. It's written by David Chikwe amd Emma Reeves.

There are quite a few comedy SF dramas. The one I'm looking forward to most is Tripped, a four-part comedy drama for E4 from the writers of BBC crime series The Missing, Harry and Jack Williams, adapted from an E4 pilot titled Alt, written by Doctor Who's Jamie Mathieson. It features a lad called Danny and his stoner friend Milo, who trip through alternate worlds, meeting different versions of themselves.

Dystopian drama tends to be crossover: both adults and older children like it. The theme is expressed by another series of Charlie Brooker's Black Mirror, Legends of Tomorrow, a kind of retro futuristic story about a ragtag group of heroes and villains trying to prevent the Apocalypse, Programmed about aliens taking over the human race, one actually called Dystopia about a virus that has rendered mankind infertile, plus several more, but apart from Black Mirror it feels like scraping the barrel.

Two dramas address the 'what if' idea of Nazi terror still being around today: Timeline Alpha and the probably much more interesting adaptation of another novel by the infinitely exploitable Philip K Dick, The Man In The High Castle.  I can't wait to see this 10 episode alternate history, having watched the pilot shown in January, that is being released on 20 November from Amazon Prime Instant Video, and is executive produced by Ridley Scott.

There are so many more, but I can't sign off without telling you about something you will no doubt have missed, so bad was it: a Christian science fiction series recently aired on the The CW Television Network that was apparently deliberately contrived to influence children. In The Messengers the devil (in the form of The Man) turns five normal people into angels with supernatural gifts that might be the only hope for preventing the impending Rapture. The storytelling was so convoluted and confusing it has, I'm very sorry to say, because it was so much fun to watch for all the wrong reasons, not been recommended for a second series.

At any rate, what's for sure is that the hunger for science fiction and fantasy is stronger than it has ever been. Good news for the prospects of Hybrids at any rate.

Help the world to read on International Literacy Day!

As it is International Literacy Day I thought I'd share this infographic with you, and use it to support this organisation: Firstbook.org, which donates books to children in need. Literacy is a door-opener to wondrous worlds of possibilities, both real and imaginary. I can't imagine not being able to read, and yet 757 million over-15s around the world are illiterate. Please support them.

Credit for the graphic: Grammarly.

Posted by DavidKThorpe at 1:02 PM No comments: