You know what they say about those who teach? So I'm teaching a writing course again... 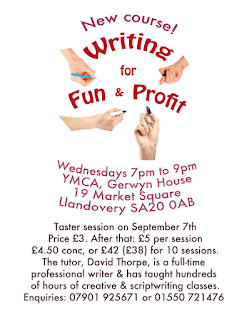 I'll be running this course – which I've run before elsewhere and has proved very popular – from September 7th. It's for anybody with an interest in writing.

It will offer support and constructive feedback and aim to build an enthusiastic, supportive group, whatever type of writing you are passionate about.

For those who have an interest in being published there will be advice and pointers about the different kinds of markets.

All types of writing and genres will be covered, from children's and adult fiction to scriptwriting, online (e.g. blogging), interactive computer games, comics, journalism, non-fiction and specialist technical or business-to-business writing – except for poetry, as there is another group which specialises in poetry in Llandovery.

I am a full-time professional writer and have taught hundreds of hours of creative and scriptwriting classes. I'm a novelist and winner of a HarperCollins contest to find a new children's writer with his young adults novel Hybrids.

I've also written, edited and commissioned many comics and graphic novels including for Marvel, and am a co-founder of the London Screenwriters Workshop.

On the non-fiction side I'm an author of thousands of journalistic articles on renewable energy and sustainable development and of over ten practical or technical/academic books on how to live more sustainably.

I'm also also a director of Cambria Publishing Co-operative and a member of the Society of Authors.

Why have linguistic standards slipped in books for older children?

One of the most successful novels ever written for older children is perhaps Anne of Green Gables. Written in 1908 by Canadian author Lucy Maud Montgomery for all ages, it has been considered a children's novel since the mid-twentieth century.

I have been reading it to my mother, now 93 and in a care home, because she read it as a child – and several times since – and she loves it.

The novel recounts the adventures of Anne Shirley, an orphan girl who is mistakenly sent to Matthew and Marilla Cuthbert, a middle-aged brother and sister who had intended to adopt a boy to help them on their farm in Prince Edward Island. She starts the novel aged 11 and ends it at 16, when she leaves school.

Anne of Green Gables has sold more than 50 million copies and been translated into 20 languages. The book is taught to students around the world.

Why do I mention it? Because I was struck strongly by the difference in language level in this book and that of books published nowadays for similar age levels.


"Mrs. Rachel Lynde lived just where the Avonlea main road dipped down into a little hollow, fringed with alders and ladies' eardrops and traversed by a brook that had its source away back in the woods of the old Cuthbert place; it was reputed to be an intricate, headlong brook in its earlier course through those woods, with dark secrets of pool and cascade; but by the time it reached Lynde's Hollow it was a quiet, well-conducted little stream, for not even a brook could run past Mrs. Rachel Lynde's door without due regard for decency and decorum; it probably was conscious that Mrs. Rachel was sitting at her window, keeping a sharp eye on everything that passed, from brooks and children up, and that if she noticed anything odd or out of place she would never rest until she had ferreted out the whys and wherefores thereof."


And from a little further in:


"Anne started off irreproachable, arrayed in the stiff black-and-white sateen, which, while decent as regards length and certainly not open to the charge of skimpiness, contrived to emphasize every corner and angle of her thin figure. Her hat was a little, flat, glossy, new sailor, the extreme plainness of which had likewise much disappointed Anne, who had permitted herself secret visions of ribbon and flowers. The latter, however, were supplied before Anne reached the main road, for being confronted halfway down the lane with a golden frenzy of wind-stirred buttercups and a glory of wild roses, Anne promptly and liberally garlanded her hat with a heavy wreath of them. Whatever other people might have thought of the result it satisfied Anne, and she tripped gaily down the road, holding her ruddy head with its decoration of pink and yellow very proudly."

Nowadays, writers for children are offered a number of pieces of advice: 'show don't tell', 'keep the language simple' and so on. These texts break all of these rules, containing 'difficult' words, extended subordinate clauses, use of the passive tense, and more.

The opening does not feature the main protagonist, nor a dramatic or emotional hook.

Let's choose a modern book to contrast with this, also aimed at girls of a similar age, Shannon Hale's The Princess Academy. It opens like this:

"Miri woke to the sleepy bleating of a goat. The world was as dark as eyes closed, but perhaps the goats could smell dawn seeping through the cracks in the house’s stone walls. Though still half-asleep, she was aware of the late autumn chill hovering just outside her blanket, and she wanted to curl up tighter and sleep like a bear through frost and night and day."

This does start with the protagonist, and contains no words longer than three syllables, and only one inverted sentence structure, with no other subordinate clauses.

There is nothing linguistically unusual about this passage either in relation to the rest of this book, nor to dozens of others published in recent decades and marketed to the same age bracket. None have anything approaching the complexity and subtlety of language which has helped make Anne of Green Gables such a success.

But I bet you anything that if this title were to be sent anonymously to modern editors or agents it wouldn't stand a chance of publication.

So my question to you is: why? What has happened in the intervening 108 years? Have the reading powers of 13 year olds worsened while their numbers have mushroomed? Have educational standards lapsed? Have editors deadened the stylistic inventiveness of writers?

Because whatever else you may say, the uncompromising linguistic complexity of Montgomery's work did nothing to dull its popularity – even if it may not be amongst the top ten books for contemporary young girls. And my mother, despite her dementia, can still follow raptly its complicated sub-clauses.

Posted by DavidKThorpe at 1:57 AM No comments: