The beauty of scepticism: a review of Murmurs of Doubt by Rebecca Fox Today I read that according to a new survey over half the people in the UK don't subscribe to a religion. I don't know what they do believe. I can only speak for myself. After being brought up Church of England, briefly flirting with evangelicism, I became an atheist– or rather a nihilist – by the time I left school.

This didn't fill the religion-shaped hole in my conditioning, however, and I spent half a lifetime looking at other, particularly Eastern religions. I've flirted with chaos magic and the I-Ching, practised meditation, been on a Zen retreat, practised tai ch'i, loved the idea of animism (but only as a metaphor), rejected astrology and homeopathy and most new age thinking.

And for most of my adult life I've subscribed to the New Scientist.

The point is, I've wanted to believe, but only in something that can be supported by evidence. Science relies on doubt, especially of its own findings, in pursuit of further and deeper truths.

Religion makes you feel as though you belong to something bigger than yourself. So does contemplating the universe.

Organised religion gives you a social group. But so does any shared interest group.

Religion can provide redemption: but so does counselling or therapy.

Religion can provide peace of mind: so does meditation (which I still practice).

For everything religion does, something else can do it less harmfully.

At university I studied (besides art) philosophy, including the philosophies of mind and religion. Amongst the tools of this discipline is Occam's Razor, which says that the simplest solution to a problem is usually the best.

Religion is a very complex solution to any of the above problems, and the alternatives, believe me, are much simpler.

And more likely to be true.

Rebecca Fox's beautifully drawn graphic story collection is an account of her own similar journey, and that of others, through the mists of doubt. The twelve tales it contains are set in many cultures: Western, African, Chinese, Indian and more.

They illustrate the many facets of belief, and of the value of questioning received 'wisdoms'.

Anyone who has ever felt the limitations of handed-down customs and conditioning will appreciate the examples given by these tales.

As the character in 'Pillow Talk' – a lesbian justifying her position to her partner – says: "I'm not an athiest because I'm angry. I'm an athiest AND I'm angry . I'm furious because this bullshit hurts people".

We live in times where religious belief has been afforded too much respect. It has over-reached itself in some quarters. Freedom of speech should be respected but only to the extent that it does not permit to speak those who would remove others' freedom to speak.

If you're confused over where this line should be drawn, then this is the book for you.

The first story is about a Tibetan Buddhist monk who rejects the dogma of reincarnation. Of course it is possible to believe that meditation has a value without believing in Buddhist precepts. That value is based on your experience. So I will agree with the monk's assertion that "I want to experience this world through eyes unclouded by doctrine and superstition".

Fox follows each story with a page of discussion and references. She very much views the book as a learning tool. She is anxious to explain everything. She has many reasons to be justified in this. Amongst them is the motivation for the story 'Mayfly'.

In 'Mayfly', a young Indian girl's curiosity is a reason to be afraid, because in her culture, if she chooses the path of knowledge then her family will see it as a rejection of them and their culture. To us in a liberal country it might not seem so much of a big deal, but in some communities it is reason enough for violence to occur.

I left out a motivation for religious belief above. The prospect of the end of our lives is the biggest fear we can face. The ideal of an afterlife in which there is reward or punishment for our deeds is the engine behind many belief systems.

But if you don't believe in an afterlife, then the prospect of death is absolute finality. It is this prospect that's addressed in the story 'Dying in the Light'.

The final tale, 'Unreal City', addresses the paradox felt by most philosophers who have questioned everything. A nurse, commuting on the London Underground, meets a fox – the embodiment of the author – and confronts the value of her life-saving skills, asking: what, in truth, can I take for granted? If it is nothing, then I am totally alone. But I don't want to be alone.

Doubt must end somewhere. For each of us it will be in a different place.

Wheeling starlings decorate the cover of this beautiful book and its accompanying website. They are, for Fox, a metaphor for the illusion of our desire to see patterns where none exist. But it's a beautiful illusion that some may prefer.

If I have a reservation about this ambitious and unique book, it is this: the stories have the feel of parables, one told for each apostle of Jesus; or perhaps all of them for doubting Thomas. I feel as though I am being given a sermon, just as I did as a child sitting in a pew when forced to go to church.

All the characters unfold their narratives in monologues or dialogues with very similar voices. They don't seem to have differentiated existences independent of Fox. I like to be shown drama in a story, not be told about it.

Instead of dialogues between two characters with differing viewpoints I would prefer to see them dramatised. High drama, with plenty at stake, forcing protagonists to make life or death choices, which compel me to ask and decide (rather than be told): what would I do in their position?

Possessing the luxury of doubt means being given the space to do so.

Posted by DavidKThorpe at 1:57 PM No comments: 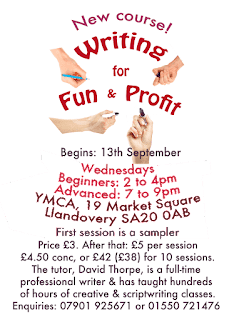 What to expect:
The course is designed to create a safe space for writers to learn about aspects of story-telling, the creation of believable characters, of a good plot and realistic dialogue, and, above all, how to make readers care and want to read on and on... Students are encouraged to offer kind, constructive criticism to each other.

Which course should you come on?


Online course:
If you can't make the lesson times, you can take the course online. The following link also tells you more about the course content and contains testimonials from previous students. You can do a combination of online and 'real world' modules if you can't make every week's session: http://davidthorpe.info/online-writing-course/ or call 07901 925671.

Cost:
Last year's students' work:
Life: Ten Slices from the Cutting Edge, is a highly readable collection of the work of ten of the many students who attended last year. Download it at no cost as a PDF here: http://davidthorpe.info/life.pdf.