When YA Books Tackle Heavy Stuff 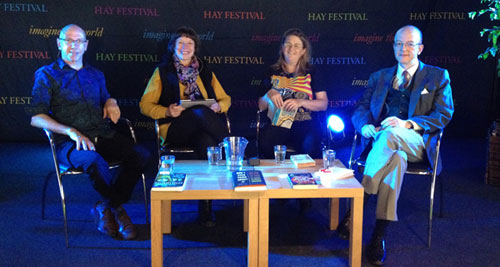 This month I was lucky enough to take part in the first panel discussion session to be held on climate fiction at the Hay Festival (or perhaps at any litfest?). Also on the panel were YA writer Saci Lloyd (third from left), and an expert in communication on climate change, George Marshall (right). The panel was convened by Jane Davidson (second from left), who's responsible for sustainability at one of the main Welsh universities, Trinity St. David's.

Saci is the author of The Carbon Diaries 2015 (written in 2007) and 2017 (written the following year). She discussed how she felt about writing about the year she is now living through... Which although not exactly as described in her book, is prescient in some ways.

In front of an audience of about a hundred, she related how she's been talking in schools and to other gaggles of teens for 10 years about climate change. "Compared to superheroes or music it looks to them at first as a pretty dull subject, but I've learned that the best way to get my message across is to be passionate, completely committed. Gradually they move from being apathetic to – 'What? Why didn't we know any of this!'"

We discussed why we feel the need to write about climate change in fiction for teens – basically, because it's hardly taught in schools. "If you do geography or science, then you might touch on it," said Saci. "But it's not a core subject, so it's quite possible to go through school and come out the other end not knowing anything about climate change."

There's nothing wrong with using fiction to talk about heavy subjects. Children's writers have been doing this since Charles Kingsley wrote The Water Babies about child chimney sweeps in 1862 (which I was given to read as a children's book when I was about six!). Yet when I said as much to the audience, my words got picked up by a young Daily Telegraph journalist sitting on the front row and turned into a headline in the following day's printed version of the paper: "Climate activists: 'We must infect children's minds'".

That headline was deliberately a come-on. To start with that first noun should have been singular! But the article itself is ok, although obviously a lot more was said. They quote me as saying that I like writing for teens because:


"They are asking all sorts of questions about how the world is working. Their minds haven't been tainted by ideological bias, they are still open minded about it.
"You can try to be seriously subversive and try to infect their minds with these viral ideas that they can explore on their own to make it exciting. When I was that age I loved having my mind boggled."

I stand by what I said, although I was speaking playfully – tongue-in-cheek – but naturally I also said a lot more (and so did the other three), and when talking about ideological bias I was referring to what George Marshall had said previously about the research he had done showing that adults generally only give credence to arguments put forward by others with whom they share the same ideological bias.  Usually children's minds are a lot more open and enquiring.

Perhaps the Telegraph is not used to the fact that writers for young adults often deal with heavy subjects, and we do so for a number of reasons, and not just because they are not covered adequately at school. We also write about them because children need to read about things that are bothering them, especially when nobody else is talking about it with them, because they're asking all kinds of questions about what they see around them, and because we want them to continue to enquire, to take nothing for granted, and to seek out answers of their own. At the same time hopefully we're telling a good yarn ("boggling their minds" as I put it).

With the predictable inevitability of the Internet, the deliberately sensationalistic bias of the headline was soon picked up by the nutters and climate sceptics who lurk as trolls on the 'net. The next thing I knew I was being accused on Twitter and certain websites of corruption of minors, child molestation and even, in one tweet from fundamentalist Jewish organisation, of being Hitler. All over the course of three days, which just goes to show the truth of Godwin's Law, written as long ago as 1990, which says that any Internet argument will inevitably lead to somebody being accused of being a Nazi.

It was up to the Telegraph's environment editor, Geoffrey Lean, to put things right three days later with a more balanced article, suggesting that in fact there is a lot of common ground between those who believe in climate change and think something ought to be done about it, and those who don't. This, however, does not justify the paper itself deliberately stirring things up and giving plenty of space to a certain climate sceptic well known for his deliberate misrepresentation of science. No wonder people are confused.

And no wonder we need to write stories which attempt to tackle this heavy stuff from a different angle.

David Thorpe is the author of cli-fi YA fantasy Stormteller and the YA SF Hybrids.
Posted by DavidKThorpe at 7:07 AM No comments: