I felt very honoured to be asked to open a new school library at St Matthew Academy, London, last week. This is another brand new Academy building, a bit weird in the contrast between its corporate grey steel-and-glass scale and some of the kids who are as young as 3! 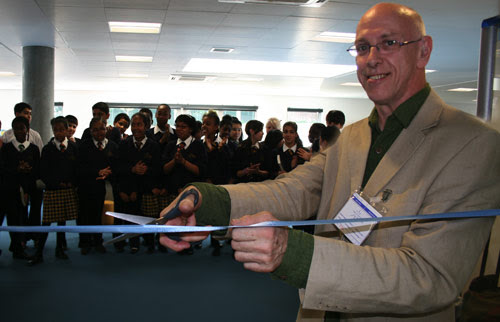 So I had to cut a ribbon and then had a very interesting discussion with a lot of Year 7 and 8 kids on young peoples' attitudes to computers, mobile phones and their technology use, some of the themes of Hybrids.

Nearly all said they themselves thought they used technology (PCs, mobiles) too much. This contrasted with just one third of the group (140 kids) I'd asked the same question of in Sefton borough, Merseyside, where Hybrids is shortlisted for another regional award. 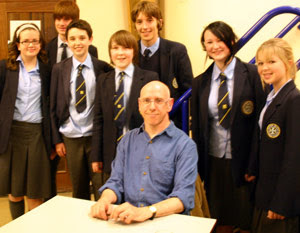 I'd been there the previous day and met 140 kids from ten schools, signing in two days about 150 books. The event was in the Crosby Civic Centre, which is near the beach where Anthony Gormley's Another Place sculptures stare out blankly at a new windfarm out to sea. People were sunbathing.

I put the difference in response between the two groups down to the perceived danger of being on the streets in south London - where a teenager was killed just a mile away two days later. They said they didn't know what else to do with their time.

When I modestly suggested "read" this was a weird idea for some! They thought this was probably due to the addictive nature of technology use and - as pointed out by one girl who'd recently arrived in the UK - because the technology is so cheap, that everyone owns it and uses it to communicate with everyone else. 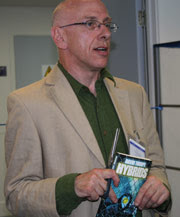 I have been invited back to Lewisham to formally receive the Lewisham Schools Book Award and host a quiz for the kids on June 5 at Forest Hill School, Dacres Road, London, SE23, at 1.30pm. I'm so looking forward to this, as i love meeting the kids and hearing their viewpoints!

The Sefton SuperReads award is announced on June 21.
Posted by DavidKThorpe at 3:43 AM 2 comments:

On the road - in Merseyside and London next week

Next week I'm coming out of my hermit's cave in deep mid-Wales and hitting the road.

On Wednesday 7th May I'll be making two appearances at the Civic Hall in Sefton, Merseyside, answering questions from kids from the local schools and anyone else who cares to drop in (at 11.15am and 2.15pm) and signing copies of Hybrids.

Then it's off to London where that evening I'll be at a Children’s Book Circle event 'Are Series Books Ruling The Shelves?' at Penguin Books on the Strand.

The following day, 8th May, I'm opening a new library at the brand new St Matthew Academy, St Joseph's Vale, Blackheath (11am) (I must sharpen my scissors for the ribbon-cutting!), and again there's a signing.

If you're in the neighbourhood, consider dropping in!


Posted by DavidKThorpe at 10:29 AM No comments: