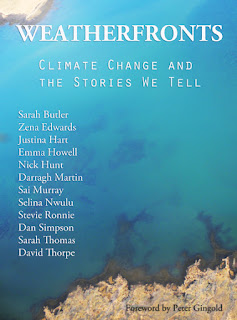 An 8000 word story of mine about the future of Britain and Barcelona is included in a new e-book published this week by Cambria Publishing.


Weatherfronts: climate change and the stories we tell is an anthology of specially commissioned work by 12 writers and poets featuring their imaginative and very different responses to the topic of climate change.

The book will be launched this Sunday at the Llandeilo Litfest and on May 25 at the Hay Festival. 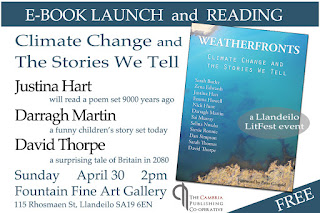 The question of how to mobilise public opinion to do something about climate change using imaginative fiction and poetry was behind two weekend-long events that resulted in the works contained within it.

These were attended by over 130 writers and 50 scientists at London’s Free Word Centre and resulted in two sets of commissions for 12 very varied writers. The idea was – to reach the parts of people’s brains that scientists and politicians cannot reach!

The project has seen writers’ and indeed all artists’ responses to the subject of climate change grow far more sophisticated and extend in range and scope.

Reading this collection one can see this progression, from the sometimes didactic to the much more considered examination of particular times, places and aspects, greater use of imagination, and even of humour, in writing for children.

So this collection presents twelve very individual approaches. The authors’ experience of the subject is very varied, but all have committed themselves deeply to their own interpretation of the theme.

All have also benefited from meeting and talking to scientists, social scientists and geographers to whom they have been introduced by TippingPoint.

The collection combines two publications only available previously as PDFs into one e-book.

From the second collection come Darragh Martin, with a delicious children’s story about ‘the shortest private detective in her school’, Emma Howell’s warm tale of the 1970s, Sarah Thomas’ exploration of her neighbours’ experience of recent floods, David Thorpe’s near future in which adapting to climate change has unfortunate consequences, and Justina Hart’s poetic evocation of the earlier inhabitants of what is now the North Sea forced off their land by the melting ice cap. Sound familiar?

If there is a common theme to these five powerful pieces of writing it is that their scale is personal.

As Peter Gingold, Director, TippingPoint, says: “This most grandiose and abstract subject is experienced at a very personal level, making its demands on the way we live with partners – or with friends, neighbours and communities. This must be fruitful.”

The pieces in this collection were commissioned by TippingPoint, Free Word and partners from 2014-2016. TippingPoint has since morphed into the project Climate Cultures.

Download Weatherfronts: climate change and the stories we tell.

Forewords by:
Peter Gingold, Director, Tipping Point
Posted by DavidKThorpe at 4:18 AM No comments: