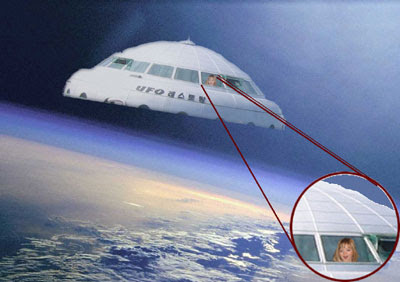 NASA has suppressed the picture above taken by the Hubble Telescope proving that Madeline McCann was abducted by aliens.

The picture was taken the day after she was reported missing, but has not been given to the Portuguese investIgators because the Portuguese did not send any soldiers to Iraq.

The Saucer has reportedly since flown to the Andromedan system, which is outside Portuguese jurisdiction.

Police are now working on the theory that her parents are also aliens, sent to earth as part of a plot to infiltrate the NHS as a prelude to selling it off to an interplanetary Hedge Fund.
Posted by DavidKThorpe at 3:11 AM

"The picture was taken the day after she was reported missing, but has not been given to the Portuguese investIgators because the Portuguese did not send any soldiers to Iraq."
big mistake above, just google for "soldados portugueses no iraque". Nice picture/post though.

Fair point, but they didn't stay long - sensibly - which is probably what pissed the Yanks off!

that is way fake lol dont say stuff like that that little girl is alone maybe dead and u makin up stuff like this!!!

My satire is about the media coverage not the girl

You're really very sick in the head. That picture, regardless of whether it is a "satire about the media", is a very sick thing to do. That little four-year old, defensless girl is somewhere, lost and scared or evern worse. I think it is bullshit you can even sit there on photshop and make disgusting jokes about her disappearance. You look old enough to know better.

And so are the publishers and editors of the Daily Express who used Maddie headlines to sell their papers - and had to print a public front page apology because they had lied - not once but twice.

Hundreds of kids go missing every ear, probably thousands. Many are pressganged into armies to fight in wars. I care about what happened to Maddie, alright, but I'm sick of the McCanns taking up news space that could be devoted to other cases.

i agree with the writer. this case is weird, sad, strange and very unique.
The parents set up a ltd company to handle proceeds.! odd.!
And 100% confirmed, the parents and that toad Clarence are going to produce a big movie about there missing girl that they say is alive?!?
WHY?
they take up more media space than any other abduction.
WHY?

Like poor Dodi and Di, this has turned into a unusual conspiracy.
Perfect for hollywood?