The State and Religion 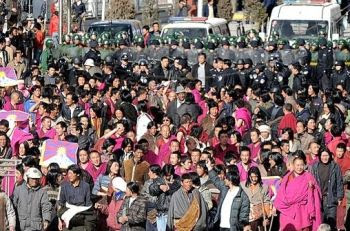 Buddhist monks are standing up for freedom and self-determination of their country's people again - and being killed for it.

This time, in contrast to Burma, the US and UK are less supportive because we can not apparently upset China. There is too much trade between UK plc and China plc,unlike with Burma.

This raises once again the vital question of the role of religion in politics.

We are supposed to think nowadays that religion is bad and produces bad politics.

But there is a very interesting piece on religion and secularism that attacks the anti-God squad of Dawkins and friends by John Gray in yesterday's Guardian.

- forms of socialism and communism have led as much to war and torture as monotheism;

- secular states are still open to religion and still promulgate war and torture (the US, UK);

- you can no more eradicate religion than religion would like to eradicate the sexual drive;

- the same applies to war and torture;

- except when you consider Buddhist states!

Gray uses the word 'religion' almost exclusively to refer to monotheism and not to Buddhism, like that in Burma and Tibet/Nepal, and other non-monotheistic religions.

I do not want to be a Buddhist; I am a humanist; I believe in the power of myth - the power of the stories we tell ourselves to move the human spirit to extraordinary places; I believe liberal democracy to be the most advanced form of society yet conceived; but that it is still self-deluding and highly vulnerable as a result; it contains notions of individual freedom that have been allowed to be exploited by unfettered capitalism; I believe that while education is a good thing (Dawkins believes it should be used to eradicate the illusions of religion), the content of education must be more open-ended and evidence-based; I believe liberal democracy does not have to be allied to capitalism but there is no example of a successful model of this.

And I believe there is no difference between the behaviour of modern China and that of a modern large corporation, benefitting its directors.

What we're seeing in Lhasa is a graphic and direct version of what happens more slowly, invisibly and less directly everywhere as a result of this type of behaviour, which is no more driven inevitably by religion or even secularism than is the will to trade.

I believe instead that the potential of human nature is manifold, to behave or manifest in any number of ways; and that therefore it is necessary as a society and as an aim of good global governance, to develop social and legal structures which reward and encourage constructive human behaviour and do the opposite to destructive tendencies...

Whether this happens through religion or through law and education is ultimately immaterial, as long as we recognise the means as being contingent, not absolute, which evangelical religion does not.
Posted by DavidKThorpe at 9:29 AM