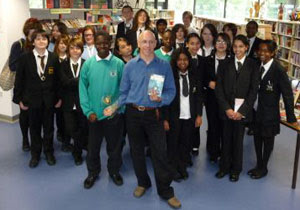 There's such a lot of great work going on to encourage children to read widely.

I was down in Lewisham and Forest Hill School last Thursday where they presented me with a lovely trophy for winning the Lewisham Book Award. 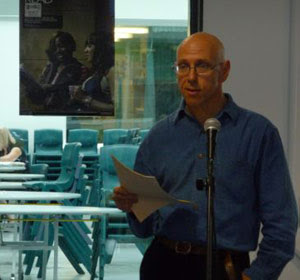 Then they got me asking questions at their annual books quiz. There were teams of three or four Year 9 children from each of seven schools in the area. There were seven rounds of 10 questions each, along the lines of who wrote what book, which book does this character belong in, and which book is this the first sentence of? There was a very wide range of books covered, and not all children's literature or contemporary. I would say Roald Dahl was the most frequently cited author.

There was even a section on So You Think You Know Shakespeare, which was one of the highest scoring rounds - they do know him alright. I'm not going to say who the winner was, because all the kids did extremely well and I was really impressed with how widely they read and their enthusiasm.

The campaign to persuade HarperCollins to publish Hybrids 2

Oh, yes, and that the kids, teachers and librarians in Lewisham all like Hybrids so much, that they are writing to Gillie Russell, the head of children's books for older readers at HarperCollins, to ask her to commission the next books in the series.

If any of you want to see this happen too, far be it from me to suggest that you write to Gillie Russell yourself as well... It wouldn't be such an awful mistake for them, as the first book's so popular, would it?

No one can understand why they're so far refusing to publish it.

No To Age Banding

I've also added my name to Philip Pullman's campaign No To Age Banding, to stop publishers age banding books. Books choose their readers and readers choose their books, they don't need marketing people telling them what to read or not to read.

It's patronising and condescending and doesn't help anybody, in my humble opinion. If you agree, sign up yourself on that web site.
Posted by DavidKThorpe at 8:12 AM