Could underground coal gasification save our coal industry? 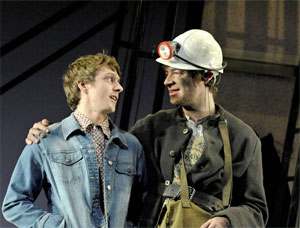 In April, I was lucky enough to witness the first night of a revival of Close the Coalhouse Door by Alan Plater, a joint production by Northern Stage and Live Theatre in Newcastle-upon-Tyne, before it went on national tour. I recommend it thoroughly: go see it if it comes near to you.

Plater gave rise to some of the country's best known plays and television series including the pioneering cop shows Z-Cars and Softly Softly, wrote The Beiderbecke Trilogy and a film adaptation of George Orwell's Keep the Aspidistra Flying, not to mention a television adaptation of Chris Mullin's novel A Very British Coup.

He was a working-class man from Jarrow who loved the north and the coal industry, and this play is a stunning attempt to tell the history of coal mining and the struggle of the miners for their human rights.

It's incredible to realise that 180 years ago children as young as six were forced to work down the mines seven days a week up to 16 hours a day. It took 150 years of campaigning for the mines to be nationalised and decent working conditions instituted.

Unlikely as it may seem given its subject matter, the audience was rolling in the aisles through its celebration of northern humour using songs and jokes; the production manages to make this narrative not only wonderfully entertaining but educational too – a kind of drama-documentary-musical-comedy.

The play was first produced in 1968, but it has been updated with a prologue and epilogue for this production by Lee Hall, best known as the writer of Billy Elliot.

Of course we all know what has happened to the coal industry since 1968, so the epilogue satirically suggests an alternative world in which the miners won the battle against Margaret Thatcher and the Conservatives and are right now controlling a socialist paradise.

In reality, there are now just 3,000 UK working miners, down from a peak of 1.25 million in 1920. Most of our coal is now imported and much of it that is home-produced comes from surface mining. The power of the labouring class has been destroyed.

But coal still forms an important part of our fuel mix, and its consumption rose by 9.3% last year.

The big difference between now and then is that now we know that burning coal is the biggest threat to global climate stability.

So we should stop using coal, right? It is the big evil. Leave it in the ground.

But what if we could find a way of burning coal without increasing greenhouse gas emissions?

After all, there is still a great deal of it in the ground. Three quarters of the coal in the north-east and in most of the other coalfields is still underground despite over 200 years of mining.

What if it could be used as a feedstock for refineries without damaging the atmosphere?


There may be a way. I was unconvinced when I first heard about it, but after a director of Live Theatre, my brother-in law Jim Beirne, told me about the work of one of its committee members in Newcastle, Paul Younger, I am prepared to believe it could be.

Prof. Younger is the Director of the Newcastle Institute for Research on Sustainability and is a distinguished hydrogeologist and environmental engineer who is renowned for his pioneering research into community-based, remediation techniques for water pollution from abandoned mines and the man behind a project to source geothermal energy from under Newcastle for a district heating system.

Writing in the programme for Close the Coalhouse Door, Younger makes the case for a revival of the coal industry using underground coal gasification (UCG) with carbon capture and storage.

He says UGC “now appears to be economically viable" and is ripe for exploitation because the polluting side-effects of its combustion would remain “locked away hundreds of metres below ground, permanently unable to access our freshwater resources".

It works by leaving the coal deep underground where it already exists, turning it into gas by injecting oxygen and steam through one set of boreholes and extracting the gas from another set.

Building on the North East's experience of safely mining coal far out beneath the North Sea, he writes that we now know both how the voids created by the process will settle and what this will do to the overlying strata, and therefore how impossible it would be for any fluids in the settled zone to migrate to the surface.

His strategy is to reinject the carbon dioxide generated by burning the extracted gas back into those voids deep underground “where it can remain until kingdom come, safely out of reach of the atmosphere"; a form of carbon capture and storage.

He is convinced that the modelling his team has done proves that it is safe and will work. For the last two years they have been compiling a technical and business model for a venture, which they call Five-Quarter after the seam which lies beneath his house.

“We hope to break ground within a year or two of the curtain coming down on this play," he says, “and the jobs which will be created will be safe, clean and hi-tech," more like in a chemical plant than a traditional coal mine.

The business strategy includes pouring some of the profits into restoring the fortunes of the former mining communities of the Great Northern Coalfield celebrated in Alan Plater's drama, and into initiatives to accelerate the development and deployment of renewable energy that would employ the descendants of miners.

As an old North East miners' slogan, which Younger is fond of quoting, puts it: “the past we inherit, the future we build".

Perhaps the story is not yet over for coal and the no-hope North Eastern towns like Ashington and Easington still devastated by the closure of coal mines twenty five years ago. We shouldn't close the coalhouse door yet.

Posted by DavidKThorpe at 3:29 AM

Hi, Thanks for sharing about biomass machine and gasifier, It’s very valuable for us.