We need more writers who can make us feel

In November, fellow author Dianne Hofmeyr posted her response to the Paris terrorist attacks with a picture of bicycle locks. 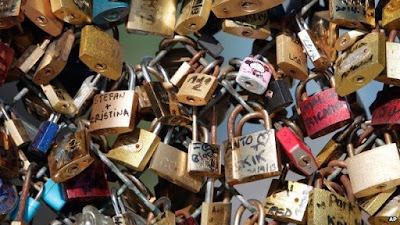 The repercussions of the attacks led to the following Sunday's planned marches about climate change in the city being banned.

The organisers of the march instead asked people to place shoes where they would have marched. This led to the following image, one amongst many photographs that were taken on the day.
In the context of the loss of life caused by the terrorist attacks the sight of these empty shoes takes on an added poignancy.

To say that writers and artists cannot address social issues like these in their work is pointless. Social issues affect children in as many ways as they affect adults but children lack the conceptual apparatus to contextualise and understand them.

Both of the above pictures remind me of artwork by Ai Weiwei that I saw at his Royal Academy exhibition, which I visited after I went on the climate change march in London in December.

For example this piece contains hundreds of steel reinforcing bars, straightened after being mangled and twisted in the Sichuan earthquake of 2008, the number of bars corresponding to the number of victims, whose names are listed on the wall behind. 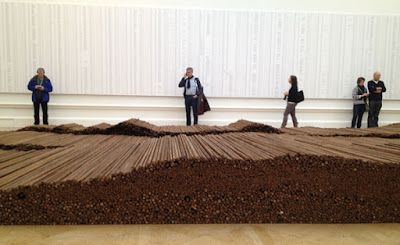 And, continuing the bicycle theme begun by Dianne Hofmeyr, this is a chandelier made from bicycles: 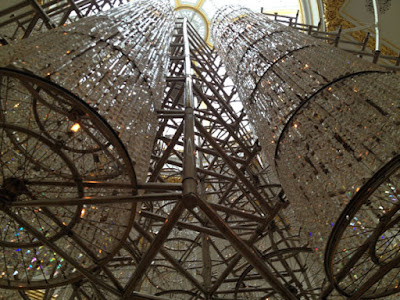 In all cases, repetition serves to reinforce the message, adding weight to the impact.

There was controversy surrounding the choice of David Almond's novel A Song for Ella Grey for the Guardian children's fiction prize, just as there often is for the Carnegie Medal children's book prize, because the winning books frequently address social issues. 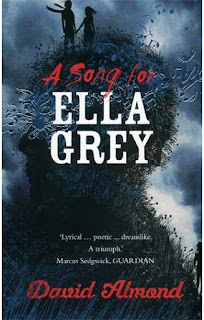 Anyone who thinks that books for children that address social issues should not win literary prizes does not appreciate what it is like to be a child these days.

Whether directly – at home, on the streets and in the playground – or indirectly – on their screens – children are exposed to violence, drugs, crime, sex, exploitation, commercial pressures, manipulation, pollution, ugliness, danger and a whole Pandora's box of other pressures.

What should children do?

Most children strive to understand what they are experiencing. Unfortunately they don't always get the opportunity to discuss what is troubling them with either their friends or adults.

At least if they see that writers and artists are addressing these issues, this can help them think about them in new ways. They can find catharsis by empathising with stories that make them cry and laugh. Reading these books can provide a jumping off point for discussion too.

Children, and teenagers especially, worry more than anything else about whether what they are experiencing in their minds is "normal" or if there is somehow something wrong with them.

Again, art and books can help them to find an answer.

Even in fantasy and so-called escapist fiction, true to life characters can be found who struggle with problems that their readers can and do relate to. Often it's easier to relate to characters in fantasy novels or films, because they are removed from close-by reality.

At the rally in Westminster at the culmination of the climate change march, the enlightened organisers put poets and singers on the bill. But of course.

It was incredibly moving to see and hear Kate Tempest reading her new poem ‘Europe Is Lost’. Hundreds of young people were there to hear her. It actually made me cry. She is a poet for the new generation.


Almond's books move me too. His latest is a retelling of the myth of Orpheus and Eurydice. Orpheus was the greatest poet of his time who had to suffer enormous loss in order to find poetic truth. It is probably my favourite myth.

Now, more than ever before, we need writers and artists to articulate what we feel.

David Thorpe is the writer of the Sci-Fi YA novel Hybrids and the cli-fi YA novel Stormteller.
Posted by DavidKThorpe at 7:27 AM