I'm hard at work writing The Drowning, and it's when you're deeply immersed in something that coincidences start to happen.

I was going to Borth (the village I drown in the book), and pulled up at random, by the sea front. I'd always known there were mosaics embedded in the wall at one point, but finding myself parked right beside them I took a closer look.

They depict two myths I am using in The Drowning. Here they are: 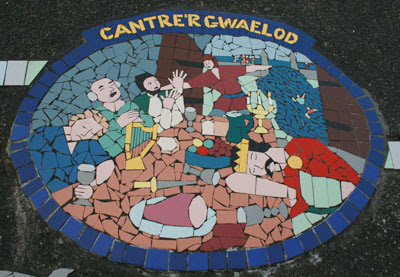 This is a mosaic by Pod Clare of the Cantre'r Gwaelod myth in Borth, Ceredigion, Wales. The myth tells of the drowning of Cardigan Bay when a prince meant to be keeping guard over the floodgates falls asleep, drunk on the job. On the right you can see the water flooding in to cover the land. 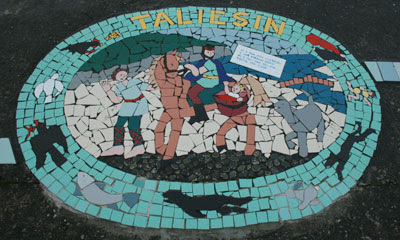 This depicts the origin of Taliesin, and shows him being discovered floating in the reeds after his birth, by Elffin, the son of King Gwyddno Garanhir, 'Lord of Ceredigion', while fishing for salmon. As soon as he was found he announced that he was a poet, and began spouting poetry. The prince called him Shining Brow, which means Talisein, or blessed (radiant) one. Round the edge you can see the chase, when Ceridwen tried to kill him because he stole the special wisdom-bestowing broth meant for her ugly son, Avagddu. Using his new magical powers, Gwion, as he was then, turned himself into a hare, fish, bird and grain of corn. In turn, Ceridwen transformed into a greyhound, otter, hawk and hen, and pecked at the grain until she had swallowed Gwion.
Posted by DavidKThorpe at 1:26 PM